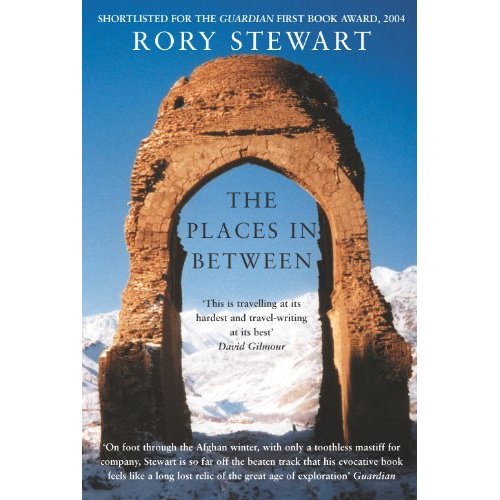 I have just finished this book- and thought it worth posting a quick review, as it’s subject material is Afghanistan- post 911.

The author Rory Stewart is an ex soldier, some time diplomat- including serving as deputy governor of an area of occupied Iraq. But in 2000 he packed in work and walked for 6000 miles from Turkey to Bangladesh.

And following the invasion of Afghanistan in 2002, Stewart decided to take a winter walk across the middle of the country.

Which was by any measure a rather mad thing to do. The country was shattered by war, traumatised by successive violent and oppressive regimes and the route he chose was thought to be impassible in winter- because of deep high mountain snow and plunging temperatures. Then there was the political situation- the minefields (both literal and figurative) to stumble into.

And of course, the strong chance that he would meet people who might seek to do violence to him.

But the end result was a walk through a varied landscape and a variety of cultural/religious situations that tells us a great deal about the country in which British soldiers are still fighting in our name.

The book is in many ways of a style more akin to travel writing of a previous generation- which suits me fine, as I love Newby, Herrer, Theroux.  It is writing that emerges from perilous encounter and adventure. And it is very well written.

Stewart relied entirely on the kindness and hospitality of Afghan villagers and local leaders for food and shelter. This made me very uncomfortable as I read the book, as some of the people he imposed himself on had very little themselves. At times, he (and the dog he picked up along the way) was clearly an unwelcome burden.

But I think this book is worth reading for these reasons-

Recommended reading as an essential antidote to the infotainment contained in the dreadful repetitive rolling news of Sky and BBC news 24.