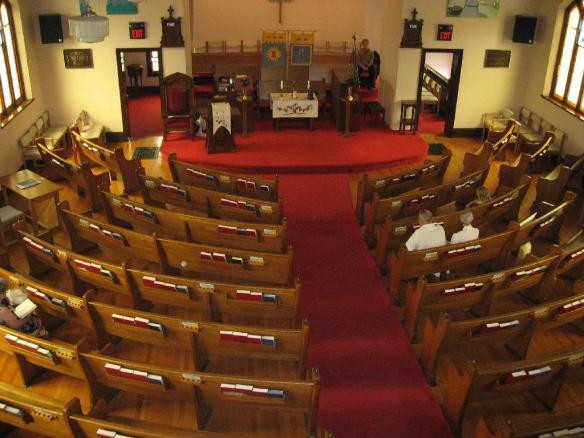 In Britain, all Church denominations are seeing decline in attendance figures. All are asking questions about what it is that we are doing, and what needs to change. Words like Postmodern and Post evangelical are used, and usually there is a suggestion that the new social context requires new expressions and practices from Church.

There is a feeling that Church is in crisis. This is not necessarily a bad thing, as we usually need crisis to create change. Crisis can be very creative. It can also be very scary and threatening, however, leading to the erection of defensive positions, and even to an Alamo mentality in some.

There is an interesting discussion in one of Brian McLarens books (The secret message of Jesus) where he talks about the crisis facing the Jewish leaders at the time of Jesus birth and early life. Jewish culture and history had been overwhelmed by an invading force. The Roman Empire had annexed Israel, and set up its headquarters in Jerusalem, the city of God. All good Jews awaited the coming of Messiah, who would overcome this evil empire and establish a new Kingdom.

But Messiah seemed to be taking his time, and in the waiting the different stratifications and sects within Judean society adopted fixed positions, partially in response to the crisis. Here are some of them

Essenes. The Essenes all but gave up on Jewish society. It was too sinful, too decadent. They withdrew to the desert, where they sought to establish new communities based

on austerity, religious observance and piety. The trappings of Jewish society were spurned, and the Essenes focused their effort and attention on the study of scripture, and the coming Kingdom of Heaven.

Pharisees. The Pharisees were the evangelicals of their day. They espoused the strict observance of rigid religious codes and laws. They evolved complex legal systems to

give shape to every situation, built from the raw material of the Laws given to Moses. Ritual purification through sacrifice and attendance at synagogue and temple was expected of all Pharisees. They also eagerly awaited Messiah, who they saw as heralding a new pure and glorious Jewish Kingdom.

For these Pharisees, the reason that Messiah did not come was because of the sinful state of the nation. Every where there was impurity. Sexual immorality, political compromise and accommodation with the enemy, unclean and unworthy people. So they set out on a mission to clean up society.

Jesus seemed to have no time for the Pharisees at all nor they for him. He seemed to be prepared to hangout with these impure and unworthy individuals, and to break all sorts of religious laws. He taught a perversion of correct doctrinal law, and kept going on about love and forgiveness.

Herodians. The Kings Herod (there were quite a few different ones) were puppet rulers of a Roman province. Their power came from compromise and political maneuvering.

They also had a dreadful reputation for debauchery, incestuous relationships, and murder. Their followers were largely the Jewish ruling class. They were pragmatic realists who may not have liked the situation that the nation found itself in, but recognized the futility of struggle, and the need for peace and stability.

Jesus threatened this stability, because people said he was Messiah. But confusingly, he did not seem to be setting himself against the Romans. He told people to continue to pay taxes, and even HEALED family members of Roman soldiers.

But there was all this talk about the NEW KINGDOM.

Zealots. The Zealots wanted the nation to rise against the oppressor. They lived with the stories of David and Jonathan, who fought in the power of God. If but a few would

rise up, surely this would herald the coming of Messiah? After all, was this not the PURPOSE of Messiah?

Jesus invited a Zealot into his inner circle. A man called Judas Iscariot. He seemed to have many of the attributes of a revolutionary. But his message of peace and the loving of enemies found no allies within the ranks of the Zealots.

If there was a New Kingdom, then where was the King, and where were his armies?

Does this have any relevance to the crisis facing Church today? I think it does.

As Christians, our response to the crisis in our age may follow similar paths

Our understanding of the Kingdom of God, and the PURPOSE of Church as the collective of this Kingdoms AGENTS, is also challenged by this analogy.

These are questions, not answers, but I am excited. New things are happening. He is making all things new.

Church is in crisis.

Blogged with the Flock Browser