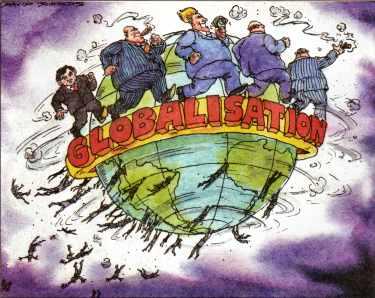 What is happening in the economic world? The news is full of competing ‘expert’ voices- some seeking to reassure and proclaim business as usual, others taking on the role of doom mongers, proclaiming the end of the world as we know it. If the later group are to be believed, then pretty soon we will have to throw away our plastic and start bartering with chickens and baskets of logs…

Whoever we believe, it seems clear that there are huge changes afoot. Here is a quote from this article from The Independent newspaper…

The Western world is in an economic crisis similar in scale to the oil shock of 1973. What we are seeing is nothing less than the unravelling of neo-liberalism – the dominant economic and ideological model of the last 30 years.

The disintegration of Anglo-Saxon-inspired markets has come about largely because of the confluence of two tendencies of the “free market”: speculation and monopoly capitalism. Contrary to received opinion, free markets – unless subject to civil regulation, asset distribution and persistent intervention – always tend to monopoly.

Similarly, there is nothing inherently efficient about free markets – they do not of themselves promote sound investment or wise management. Rather, when markets are conceived wholly in terms of price and return, and when asset wealth and the leverage that this provides becomes as concentrated as it was in the 19th century (which is a scenario we are approaching), then markets encourage nothing other than gambling masking itself as sound investment.

In the free market? What would Thatcher say?

Is this finally the time when the stranglehold that neoliberal thinking has had on the economic world for the last 30 years is broken?

Will the IMF and the World Bank stop deifying the free market?

There seems to be a resurgence of confidence in the old leftist politicians- check out this article from the Guardian newspaper- and the quotes taken from is below;

Sadly, I don’t think this will be the end of capitalism. But there is going to have to be a return to a much, much more interventionist state. As a system for the distribution and exchange of goods, you can’t beat the market. But the mistake a lot of politicians have made is to think that because the market was good at that, it could be good at everything: it could train workers, create infrastructure, protect the environment, regulate itself. Quite obviously, it can’t.

I remember the 1930s. What the Depression did then was to stimulate antisemitism. I met Oswald Mosley in 1928 when he was a Labour MP. The next time I met him he was wearing a blackshirt. Where there is fear, there is scapegoating, and that is very dangerous.

Blair and Brown based their politics on a belief in the market: the market answered all your needs and the state had to be kept out. That confidence has now collapsed and New Labour is seen for what it is. You can’t, as New Labour believed, nurse capitalism.

What next then? Is Tony Benn right, and we live in a time when fear could stimulate the rise of hate politics, where we look again for scapegoats, and we retreat into our tribal enclosures and look with loathing at those outside? History warns us of our tendency look for messiah figures who appeal to the base instincts of the human animal.

But as for me, the uncertainty and fear that such change brings into our lives is combined with an excitement over the dawning of something new. Capitalism is not dead- but it will not be the same.