Politicians will assume a pose of media-appropriate sombre dignity

Most of us will feel a familiar ambivalence-

War is terrible, but we continue to make war. Peace is a blessing, but we are stirred by stories of gallantry and self sacrifice that only seem possible in the context of brutality and slaughter.

Our inherited memories of the last war are of a nation forged together in terrible adversity in heroic struggle against the rise of pure evil. The fact that we triumphed at terrible cost is for ever something that makes us proud. Those that died so that we might have escaped the fate of so many other countries deserve our deep respect.

But we also know that the story of war is rarely one of good and evil. It is about evil and still more evil.

And evil has a history- it has the big scale history of previous armistice and forced accommodation and compromise. The sort of history that we can read about in books- Empires rising and falling.

But there is also small history that tells the story of how we as humans seem to have such a propensity to breed hate for one another.

How we look at difference and see danger. How we segregate so easily into ‘insiders’ and ‘outsiders’. How we demonise those people whose prominence threatens our own.

Most of us will have little influence on big histories- and my generation have been blessed to see few of ours names on war memorials. But if we are honest, those same engines for hate and war work within is all.

So this Remembrance Day, let us remember those who fought and died.

But let us also stand in examination of our own failures to follow the way of peace. 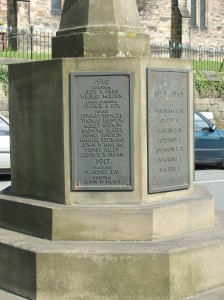 A time to hate

There is a time for all things under heaven…

One summer evening I lay on my back as the light leached from the passing day
And watched the stars slowly flicker into the frame of the darkening sky
At first one here, another there
Then all of a sudden the sky was infinite
Full of fragile tender points of ancient light
Some of which started its journey towards us before there was an ‘us’
And I wonder
Is there someone up there
Raising his tentacles to the night sky
And using one of his brains
To wonder about me?

And should this unseen and oddly shaped brother across the huge expanses
Seek contact
What would he make of us?

And I fear the truth of this
That somewhere in the messy beauty of humanity
We nurture an evil seed –
Grow it in an industrial compost of scientific creativity
Water it with greed and avarice
And hot house it in a mad competition for the first fruits
Lest our neighbours get to market first
And once we work up production
There is no going back
No squeezing back the genie into the oil can
There is only the need for bigger, better

May we decide that now is not
The time
To hate