I am interested in ideas. I think they can change everything and that perhaps above all, we live in a time when ideas are desperately needed otherwise how will anything change? 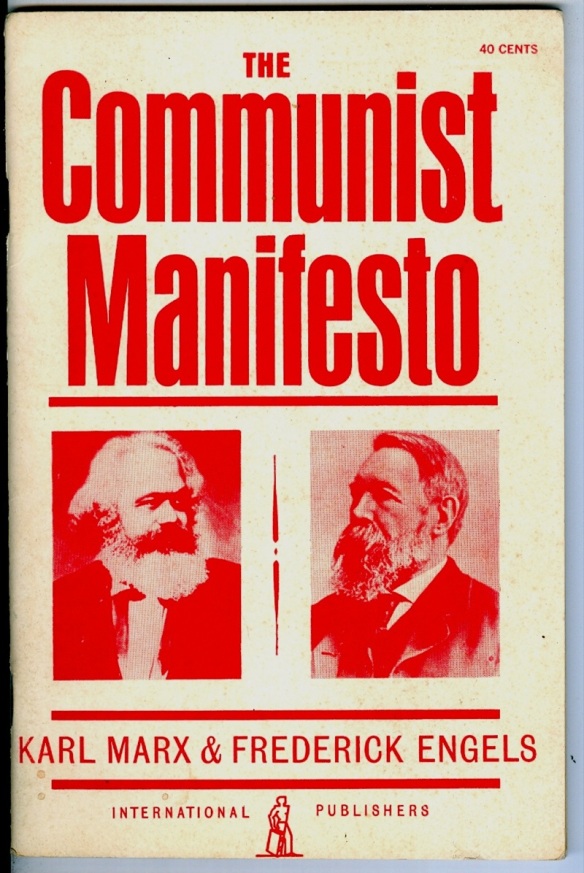 There is an irony in measuring the success of political or theological ideas by the sales of their sacred texts, but nevertheless the permeation of these ideas into the consciousness of modernity has been in no small part due to the  information revolution of a former age- the printing press.

I am aware that to many (particularly those who read this blog on the other side of the Atlantic) these words are something close to being taboo. They are regarded as dangerous, evil words. They are also perhaps regarded as defeated words- finally overcome by the rise of the forces of light and truth (revealed in the holy form of democratic capitalism.)

This is less the case in the UK, where socialism is a political term divorced from it’s original meaning as painted by Marx and Engels. This from here;

Socialism is defined as a mode of production where the criterion for economic production is use-value, and is based on direct production for use coordinated through conscious economic planning, where the law of value no longer directs economic activity, and thus monetary relations in the form of exchange-value, profit, interest and wage labour no longer operate. Income would be distributed according to individual contribution. The social relations of socialism are characterized by the working-class effectively controlling the means of production and the means of their livelihood either through cooperative enterprises or public ownership and self management, so that the social surplus would accrue to the working class or society as a whole.

Marx saw socialism as the inevitable consequence of greed, oppression and unfair distribution of the power and assets within post agricultural societies. He thought that the tensions created were so great that change was inevitable.

Except that it did not quite work out like that did it?

However the story of Communism is not over. There is a fascinating article in the Guardian entitled ‘The return of Communism’;

Today, 164 years after Marx and Engels wrote about grave-diggers, the truth is almost the exact opposite. The proletariat, far from burying capitalism, are keeping it on life support. Overworked, underpaid workers ostensibly liberated by the largest socialist revolution in history (China’s) are driven to the brink of suicide to keep those in the west playing with their iPads. Chinese money bankrolls an otherwise bankrupt America.

The irony is scarcely wasted on leading Marxist thinkers. “The domination of capitalism globally depends today on the existence of a Chinese Communist party that gives de-localised capitalist enterprises cheap labour to lower prices and deprive workers of the rights of self-organisation,” says Jacques Rancière, the French marxist thinker and Professor of Philosophy at the University of Paris VIII. “Happily, it is possible to hope for a world less absurd and more just than today’s.”

That hope, perhaps, explains another improbable truth of our economically catastrophic times – the revival in interest in Marx and Marxist thought. Sales of Das Kapital, Marx’s masterpiece of political economy, have soared ever since 2008, as have those of The Communist Manifesto and the Grundrisse (or, to give it its English title, Outlines of the Critique of Political Economy). Their sales rose as British workers bailed out the banks to keep the degraded system going and the snouts of the rich firmly in their troughs while the rest of us struggle in debt, job insecurity or worse.

We stand on the brink of something new.

What shapes this new thing will be an amalgam of political and economic vested interests, expediency and (just perhaps) the power of the idea. Ideas of course can be dangerous and Communism, with its appeal to the highest moral human purpose, might well be the most dangerous of all. But much of what is in there might be regarded as a natural progression of the teachings of Jesus. C S Lewis called Communism ‘a Christian heresy’ after all.

But what form might these ideas have to carry us forward?

One of the ‘full stops’ to any debate about Communism that I have heard is this one- it can never work, because of basic human nature. We will only work for our own advantage. Without the possibility of the accumulation of individual wealth, even at the cost of others, human society will naturally degenerate and wither into unproductivity.

This is such a depressing idea- that despite the odd individual expression of selfless altruism, humanity is essentially greedy, self serving and only motivated by gaining ascendency over the other. Jesus had a few words to say about this I think.

What other forms of human productivity and exchange might form the currency between us? The Zeitgeist movement have had considerable discussions already about the possibilities of societies without money. However, some of the Communist analysis of the economic processes that have fuelled our current crisis has centred around the ‘Law of Value’;

In his formidable new tome Less Than Nothing: Hegel and the Shadow of Dialectical Materialism, Slavoj Žižek tries to apply Marxist thought on economic crises to what we’re enduring right now. Žižek considers the fundamental class antagonism to be between “use value” and “exchange value”.

What’s the difference between the two? Each commodity has a use value, he explains, measured by its usefulness in satisfying needs and wants. The exchange value of a commodity, by contrast, is traditionally measured by the amount of labour that goes into making it. Under current capitalism, Žižek argues, exchange value becomes autonomous. “It is transformed into a spectre of self-propelling capital which uses the productive capacities and needs of actual people only as its temporary disposable embodiment. Marx derived his notion of economic crisis from this very gap: a crisis occurs when reality catches up with the illusory self-generating mirage of money begetting more money – this speculative madness cannot go on indefinitely, it has to explode in even more serious crises. The ultimate root of the crisis for Marx is the gap between use and exchange value: the logic of exchange-value follows its own path, its own made dance, irrespective of the real needs of real people.”

Is it really possible to value products by the labour that goes into making them?

And can we really disentangle the financial system that appears to have taken on a life of it’s own, a bit like Frankenstein?

Whatever the horrors that ideas like Communism may have unleashed in the past, I still hope that ideas will emerge that  will be a path that people can travel again.