My father is visiting at the moment.

We did not know each other until a few years ago- a long story of a broken family and much distance created, and it was not until my 40th birthday that we met again. Since then we get together fairly regularly.

The obvious question this brings is; what of me comes from him?

In some ways we are quite alike. He is quietly spoken, rather shy and tall. In other ways, it seems we are creatures from a different world. He has a thick Irish accent, and hardly went to school (I suspect Dyslexia, which lots of other people in my family seem to have too.)

Today however, we mended a lawn mower, and it occurred to me that we both have some natural affinity with tools. We can make things and mend them. Emily took this photograph through the living room window; 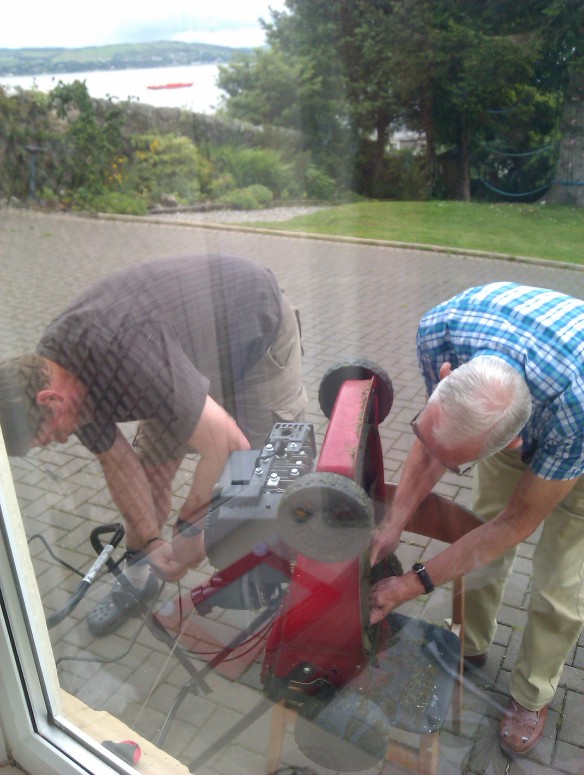 The other thing I discovered was a connection to cricket!

My dad grew up in a tiny place near Strabane in Northern Ireland called Sion Mills. He was the youngest surviving child of six brothers and sisters, and both parents worked at the local Flax mill, and died young as a result of problems with dyspnoea associated with the fibres.

The mill also had a cricket team, reputed to have beaten a touring Australian team. They may have had some help from the Bushmills.  The team was once the most powerful club side in Ireland, and also holds the record for the biggest hit in cricket history. The ball landed in the goods wagon of a passing train and was recovered in Derry, 17 miles away.

I came across this clip from another game played at Sion Mills between Ireland and Clive Lloyd‘s West Indies. You can see the old Mill in the background.

I assume that the West Indies players had been liberally entertained.