Emily described a news clip she watched the other day- a mother grieving the death of her son, a Jihadi martyr. The poor woman seemed to veer between terrible loss and the cultural sponsored celebration of his violent death.

The terrible contradictions stayed with me.

All those mothers who are told that God is pleased with the death of their sons. Two thousand American and British mothers in Afghanistan. Twelve thousand Afghanis.

The proud, rich culture of Afghanistan is of course well used to war being waged on its soil by foreign invaders; Persian, Greek, Indian, Russian, British, American. The scarred land becomes fertile ground for the raising of revolutionary warriors, but this is not the point of this piece.

Afghanistan is also rich in the tradition of poetry- Ghazal’s have been written there for millennia recording the human conditions- both the pain of loss/separation and the beauty of love in spite of all the pain associated with it. It should then be no surprise that the Taliban in modern times still tell the story of who they are in poetry.

A new book is out telling some of the story; 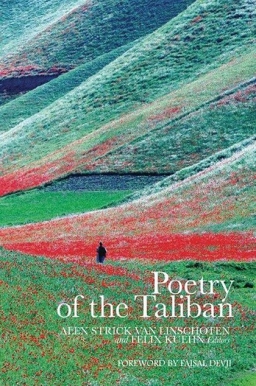 There is more about the book here and here.

There is of course, much war propaganda arising from Afghan recent history;

I write the terms of my debt on the chest of the arrogant.

They will ride the white horses in the red field,

Then we will install the white banner on the Kremlin’s chest.

The day of red blood will become red with the Red’s blood,

The knife that is stuck into the Chechen’s chest today.

My enemy, go and read the history of heroism,

There is a page written about Macnaghten’s chest.

The Pharoah of the time send arrows everywhere, These arrows will finally strike Washington’s chest.

Amid all the glorification of death and the calling for the blood of the foreigner, there appears to be some hope;

…a great deal of this Taliban poetry will be comprehensible to western readers who are unable to understand Taliban ideology. The major themes are recognisable, even universal, and the dominant form is the ghazal, or love lyric, which links the Pashtu language to the classical civilisations of Persia and India. The poems describe a land of mountains and pines, each stone a ruby, each bush a medicine, and of laughing blossoms, dancing tomorrows, of twilight arriving with its lap full of red flowers (a poem called Sunset, reproduced here, reads more like a product of a Zen monastery than of a Deobandi madrasa).

What is interesting is that the Taliban’s official face and past practice has been so fiercely anti-Sufi, anti-historical, and seemingly anti-culture. This book provides an entirely different outlook. Indeed, in their rich memory of 19th-century British invasions, of Afghan folklore and Islamic heroism, the Taliban poets seem more awake to history than we are.

As well as raillery and satire against the foreign enemy and its local servants, there is self-criticism aplenty. “Humanity has been forgotten by us,” writes one poet. “And I don’t know when it will come back.”

Poetry will do that. It can not be tied for ever to narrow ideology- it has to fly. Let us celebrate the open hand over the clenched fist. The space forced open by love in a wall of hate- wherever we find it.

Back to the news story that Emily told me about. Here is my own response in poetry;

But what care I for dancing now?

Tender flesh of my sucking flesh

Is now blown by foreign flies

They tell me that his death had purpose

But once his life was all the purpose I ever needed

And will never bear my grandchildren?

And poems will be made from his bravery

But what care I for war stories

The songs I sing will smoke the air with sorrow

My precious son is dead

3 thoughts on “Taliban poetry- the voice of Jihad…”