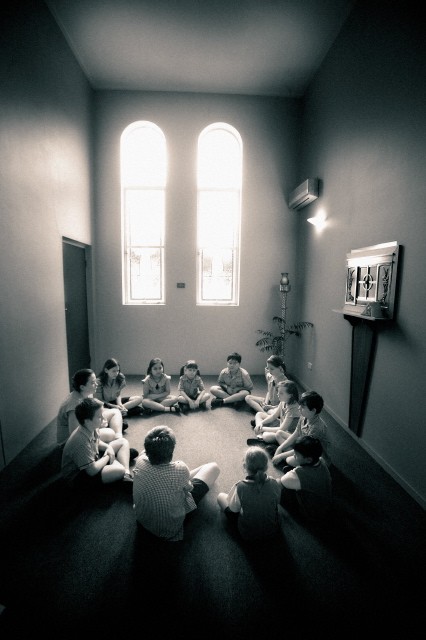 So, it turns out that the slightly sceptical tone of my last piece about the potential for using Christian meditation/contemplation in schools was rather unjustified. An old friend (Rob) now in Australia pointed out that there have been well documented projects down under doing just that!

There is more in this Guardian article.

When an almost pathological “busyness” is the norm, valuing stillness and silence is counter-cultural. When our culture trains us to be winners, to compete and to consume, we all sense society’s imbalance, said Freeman. We need to give children an experience of another way of relating to themselves and to others.

Deputy director Christie agreed. If children are over-stimulated we rob them of something precious: being allowed to “just be” where children discover their own inner sense of who they are. Hijacked by a “doing” culture that measures everything by what we achieve or possess, meditation helps children access a deeper part of themselves – an inner sanctuary away from a world of incessant activity and noise. They learn to honour their own spiritual life.

I went googling and came across this, from New Zealand, which describes a simple process being followed there in the wake of the work mentioned by Rob;

The language used in this piece will be alien to some of us. We are used to all spirituality being mediated via head knowledge- treated as an opportunity to engage with  Biblical knowledge or theological proposition. The idea of creating an ‘open’ space in meditation would have been regarded as deeply suspicious within the Christian tradition I grew out of. We would have suggested that this laid us open to some kind of ‘Demonic attack’. I have no doubt that this closed us off to traditions and practices that are sources of deep strength and blessing.

What I like most about this piece is not just the possibilities for our children, but the greater possibility of us all becoming like children.

The man whose teaching is behind some of the work in Townsville, Queensland referred to by Rob and the DVD above is Father Lawrence Freeman. Here he is talking about the relationship between meditation and ‘sacred play’ which is a truly lovely idea;

A lot of the weblinks that relate to Lawrence Freeman appear to no longer work- links to resources and discussions about meditation with Children. I hope he has not fallen foul of the current conservative backlash in the Catholic Church, as I think he seems to me to be a source of light. There are a load of resources here however.

He has been one of the founders of Meditatio.

2 thoughts on “Meditation is (not just) for kids…”