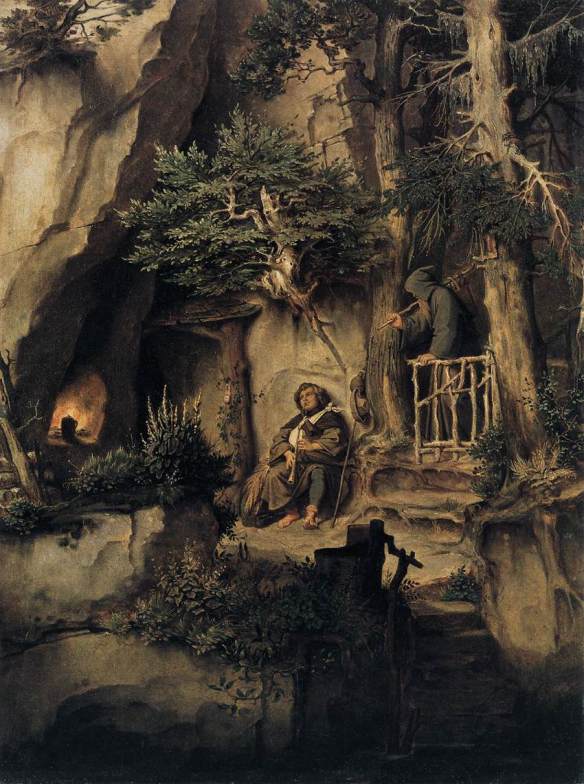 Have you been following the story of Christopher Knight, who aged 19 walked into the woods in Maine and lived there alone for the next 27 years, surviving by making raids at night to steal food and camping gear? He lasted all those winters with no fires lest he was discovered, wrapped in sleeping bags, until he was arrested stealing food in a trap laid for him. He is now in prison, exhibited like a circus freak.

Writing in the Guardian, Jessica Reed said this;

…for me, hermits, tramps and assorted train-hoppers are a source of hope. They remind me that no matter how caught up we might be in the rat race, there is always a way out. If towering buildings, fumes and overcrowded buses become too overwhelming, those freedom seekers remind us that we can make the choice to just opt out and hit the road. It’s not a lifestyle which would be adopted by many – the vast majority of us would never dare to leave our comfortable life behind – but it is there…

… those who truly master the art of the disappearing act acquire an unworldly quality: they become ghosts, mysterious presences, part of the local folklore, floating unshackled in the wild. This may not be what Thoreau had in mind when he spoke of transcendentalism, but for me it comes pretty close to transcending what capitalism expects of its subjects…

…If the truth be told, I really wish they hadn’t caught him.

I feel the same- sad that he is not still out there in his tent, reading the changes in nature, familiar with the birds and looking forward to everything that spring has to offer.

Which is strange, as I am at my most content when at home with my family. I love to be with my friends and hold on to a high ideal of community. But I entirely understand the longing for a cave or a shelter in the deep woods that is all my own.

There is of course a long tradition of seeking solitude and isolation in the Christian tradition. I always get the impression that famous religious hermits even then had something of a freak show value- they became some kind of celebrities and their stories live on even now.

There was Simeon Stylites for example;

On one occasion, moving nearby, he commenced a severe regimen of fasting for Lent and was visited by the head of the monastery, who left him some water and loaves. A number of days later, Simeon was discovered unconscious, with the water and loaves untouched. When he was brought back to the monastery, it was discovered that he had bound his waist with a girdle made of palm fronds so tightly that days of soaking were required to remove the fibres from the wound formed. At this, Simeon was requested to leave the monastery.

He then shut himself up for one and a half years in a hut, where he passed the whole of Lent without eating or drinking. When he emerged from the hut, his achievement was hailed as a miracle.[2] He later took to standing continually upright so long as his limbs would sustain him.

After one and a half years in his hut, Simeon sought a rocky eminence on the slopes of what is now the Sheik Barakat Mountain and compelled himself to remain a prisoner within a narrow space, less than 20 meters in diameter. But crowds of pilgrims invaded the area to seek him out, asking his counsel or hisprayers, and leaving him insufficient time for his own devotions. This at last led him to adopt a new way of life.

In order to get away from the ever increasing number of people who frequently came to him for prayers and advice, leaving him little if any time for his private austerities, Simeon discovered a pillar which had survived amongst ruins, formed a small platform at the top, and upon this determined to live out his life. It has been stated that, as he seemed to be unable to avoid escaping the world horizontally, he may have thought it an attempt to try to escape it vertically. For sustenance small boys from the village would climb up the pillar and pass him small parcels of flat bread and goats’ milk.

In this last and lofty station (15 M high, 1M square), the Syrian Anachoret resisted the heat of thirty summers, and the cold of as many winters. Habit and exercise instructed him to maintain his dangerous situation without fear or giddiness, and successively to assume the different postures of devotion. He sometimes prayed in an erect attitude, with his outstretched arms in the figure of a cross, but his most familiar practice was that of bending his meagre skeleton from the forehead to the feet; and a curious spectator, after numbering twelve hundred and forty-four repetitions, at length desisted from the endless account. The progress of an ulcer in his thigh might shorten, but it could not disturb, this celestial life; and the patient Hermit expired, without descending from his column.[3]

This degree of asceticism, to a lazy and easily distracted contemplative such as myself has a similar effect to the story of Christopher Knight.

The possibility of a life beyond what we understand is tantalising- not because it offers a real choice to us, but because it allows is to imagine a life beyond. A richer, more vibrant, more connected life; to the order of things, and to God.