The media has been constantly picking over the terrible scenes from Boston yesterday- in particular some footage taken on a mobile telephone of the bombs going off- each time in slow motion. There is something fetishistic about it all, despite the utter horror.

At the same time we have had endless speculation about who did it, why they did it, and heard the eye witness testimony of anyone and everyone who was there and prepared to discuss what they saw, and how horrible it was.

Three people dead, over a hundred injured, all reduced to endless infotainment. 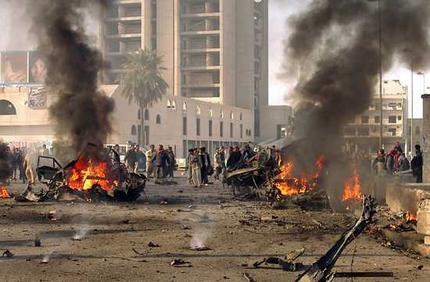 It may come as a surprise to hear that these were not the only bombs that exploded in the middle of packed innocent humanity yesterday. In a wave of bombing across Iraq, at least 27 people were killed and over a hundred injured.

The news told us next to nothing about these other bombs. They were not newsworthy. People in Iraq die all the time, and are not like ‘us’ – there is no shock value, no sense of righteous outrage therefore no airtime required.

The news has never been just a provider of neutral, bald factual information- it has always been a cultural construct. There was a discussion on the radio this morning about how in the past the news could be regarded as a unifying force- we gathered round the wireless at set times, and (for good or ill) the news collectified our sense of being- it told is who we were.

Those days are gone. Now we can not escape the news- it comes at us full speed from a thousand different sources. It is spewed out so fast and the media machine is so hungry, that content now is increasingly instant, but somehow entirely predictable and repetitive. Stories are slotted into grooves dependent on what we are thought to expect- what will hold our attention, and cause us to retweet items, and share them on facebook.

Is this a problem? When it supports western centric colour blind prejudice it certainly is. Perhaps there are other issues too. Check out this article. Here are a couple of extracts;

In the past few decades, the fortunate among us have recognised the hazards of living with an overabundance of food (obesity, diabetes) and have started to change our diets. But most of us do not yet understand that news is to the mind what sugar is to the body. News is easy to digest. The media feeds us small bites of trivial matter, tidbits that don’t really concern our lives and don’t require thinking. That’s why we experience almost no saturation. Unlike reading books and long magazine articles (which require thinking), we can swallow limitless quantities of news flashes, which are bright-coloured candies for the mind. Today, we have reached the same point in relation to information that we faced 20 years ago in regard to food. We are beginning to recognise how toxic news can be.

News misleads. Take the following event (borrowed from Nassim Taleb). A car drives over a bridge, and the bridge collapses. What does the news media focus on? The car. The person in the car. Where he came from. Where he planned to go. How he experienced the crash (if he survived). But that is all irrelevant. What’s relevant? The structural stability of the bridge. That’s the underlying risk that has been lurking, and could lurk in other bridges. But the car is flashy, it’s dramatic, it’s a person (non-abstract), and it’s news that’s cheap to produce. News leads us to walk around with the completely wrong risk map in our heads. So terrorism is over-rated. Chronic stress is under-rated. The collapse of Lehman Brothers is overrated. Fiscal irresponsibility is under-rated. Astronauts are over-rated. Nurses are under-rated.

News kills creativity. Finally, things we already know limit our creativity. This is one reason that mathematicians, novelists, composers and entrepreneurs often produce their most creative works at a young age. Their brains enjoy a wide, uninhabited space that emboldens them to come up with and pursue novel ideas. I don’t know a single truly creative mind who is a news junkie – not a writer, not a composer, mathematician, physician, scientist, musician, designer, architect or painter. On the other hand, I know a bunch of viciously uncreative minds who consume news like drugs. If you want to come up with old solutions, read news. If you are looking for new solutions, don’t.

Society needs journalism – but in a different way. Investigative journalism is always relevant. We need reporting that polices our institutions and uncovers truth. But important findings don’t have to arrive in the form of news. Long journal articles and in-depth books are good, too.