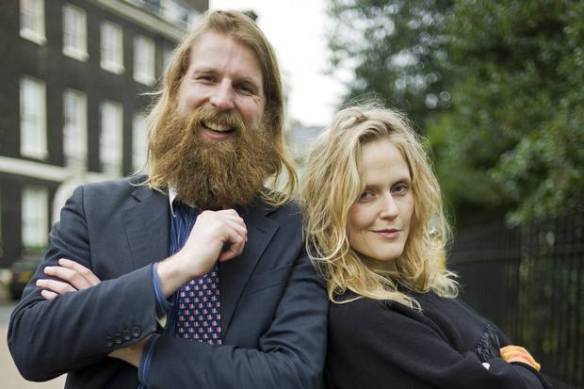 I am sure many of you have heard of the Atheist church services put on by comedians Sanderson Jones and Pippa Evans in London. Around 600 non-believers have been gathering in Bethnal Green since January to listen to inspirational talks, sing songs accompanied by a live band, make friends and volunteer for good causes. Meetings are about to move from monthly to fortnightly.

It now seems that they are taking the idea to international heights- there is already a monthly event in New York, with ‘services’  to begin soon in Los Angeles, Chicago and Seattle.

A ‘religious’ service without God, I hear you ask- what is the point? This from here;

The Sunday Assembly was created after Jones attended a Christmas carol service and enjoyed the sense of community: “There were so many wonderful things about it, but at the centre of it there was something I didn’t believe in. And for me, life is such an absolute gift so why can’t we talk about that?”

He added: “I’d always thought there’d be people in other parts of the world who would like this. It was picked up by the media and more than 750 people around the world have written to us saying they’d like a Sunday Assembly in their town.” At the New York meeting, the congregation sang songs by the Beatles and Queen, and closed with Proud Mary by Creedence Clearwater Revival. Guest speaker was Chris Stedman, a humanist chaplain at Harvard.

It coincided with the city’s Gay Pride march, so the theme was “coming out”. Jones said: “People in the US talk about coming out as atheists. I’d think, what’s an ‘out’ atheist? That’s bonkers.”

Jones visited nine other US cities where people asked for advice on setting up assemblies. In the UK, branches will launch in Bristol this weekend and Exeter and Brighton in September. Jones and Evans kick off a global roadshow on October 20, with 40 assemblies in 60 days. Locations, decided by demand via their website, include Australia, France and Scandinavia.

Evans, a Christian until she was 17, said: “When I stopped believing in God, I didn’t miss God but I did miss church. And that’s the point of the assembly, meeting like-minded people and bolstering each other up.”

Jones added: “Atheists are very good on reason, and science, but that doesn’t get you jumping out of bed in the morning. This is about being alive.”

All of which sounds quite lovely to be honest- anything that celebrates community, encourages people to do good things and to live life in a deeper and fuller way is OK with me.

What does it mean however to call yourself an Atheist? It suggests a little more than just indifference to the idea of a supreme being at the centre of it all.

Perhaps some might describe it as a religion that sets out to describe all other religions as wrong. There are after all a lot of those kind of religions.

As a Christian, I was brought up to see atheists as evil, deluded, the enemy. Agnostics were perhaps redeemable, but atheists were active opponents of God. They were sticking two fingers up at the divine and would have eternity to regret their foolishness. Militant atheists like Dawkins have done nothing to erode the battle lines.

I found this article by Andrew Brown in the Guardian really helpful, in which he describes six kinds of atheism (based on American research);

The largest group (37%) was what I would call “cultural non-believers”, and what they call “academic” or “intellectual atheists”: people who are well-educated, interested in religion, informed about it, but not themselves believers. I call them “cultural” because they are at home in a secular culture which takes as axiomatic that exclusive religious truth claims must be false. Essentially, they are how I imagined the majority readership of Comment is free’s belief section.

They are more than twice as common as the “anti-theists” whose characteristics hardly need spelling out here:

If any subset of our non-belief sample fit the “angry, argumentative, dogmatic” stereotype, it is the anti-theists. This group scored the highest amongst our other typologies on empirical psychometric measures of anger, autonomy, agreeableness, narcissism, and dogmatism while scoring lowest on measures of positive relations with others … the assertive anti-theist both proactively and aggressively asserts their views towards others when appropriate, seeking to educate the theists in the passé nature of belief and theology.

Nonetheless, these people made up only 14% of their sample, and all other research that I know of would place their proportion much lower.

The other two noteworthy groups are those to whom religion is completely and entirely irrelevant, “non-theists”, and what the researchers call “ritual atheists“, who overlap quite a lot with “seeker-agnostics”, both of whom might be targeted under the marketing category known as “spiritual but not religious”. What defines them is the ability to treat religious practices as something like acupuncture or Chinese medicine: something that works even though the explanation is obviously nonsense:

One of the defining characteristics regarding ritual atheists/agnostics is that they may find utility in the teachings of some religious traditions. They see these as more or less philosophical teachings of how to live life and achieve happiness than a path to transcendental liberation. Ritual atheist/agnostics find utility in tradition and ritual.

As the authors observe, this covers a large spectrum of American Jewry.

(One further category, “activist“, is used to label those who hold strong beliefs on ethical and environmental issues. Pretty much what the term means in lay parlance.)

I think the English, or more generally European results, would be different. The typologies are broadly the same, but since Christianity is much less of a marker in European culture wars, and certainly not an active one in the UK, you would expect the distribution of categories to be different, and for people to be very much less self-conscious about unbelief and less likely to regard it as a salient feature of their personalities.

Atheism is an honest response to lack of belief.

However, most of us who continue to try to live with faith in God have to admit to the presence of doubt, and I for one think we should be honest about this.

I liked the perenthetical trickery of  Pete Rollins who talks about (a)theism. Contained in all our ideas about God is also the idea that what we know is always incomplete, imperfect and error-strewn. He would contend that the only honest way to approach God is to start from the point of (a)theism- where our theories about God are confronted with our unknowing.

Gravity gets us all in the end my friends, and may we all fall into the arms of a loving God.

1 thought on “The Holy Atheist Church…”