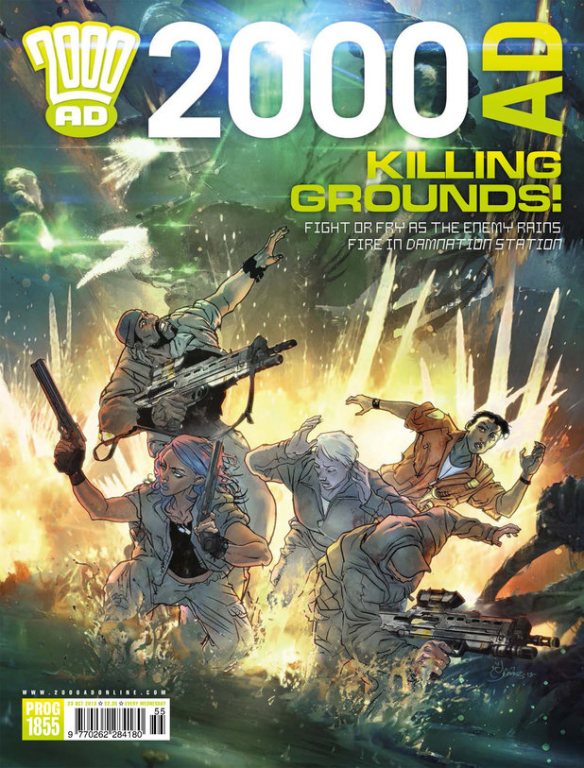 When I was a student, my mate Mark was an avid reader of the comic magazine 2000AD. He probably still has all the originals in the loft. For those of you who have not heard of it, this is a British publication that used stunning graphic art to bring to life futuristic characters such as lawman Judge Dredd,  Rogue Trooper, the robot mayhem of ABC Warriors and the mutant killers of Strontium Dog.

I often borrowed Marks copies and read them- but they made me very uncomfortable. Some I would have to skip past, as the vision of the future was so dark, so dystopian. Policemen (Dredd) who killed to dispense justice, Characters that were hard and bad, societies that were falling apart and full of violence and hatred and perpetual warfare. Robot weapons systems that killed, robot planes that rained terror.

I remembered the feeling these magazines gave me the other day, as I was reading something about the American (and British) use of remote drones. As I read it, the emotions rising in me were the same as reading those old comics.

Except this was not fantasy from the imagination of some talented geeks, this was real life, real death.

On September 11th 2001 terrorist crashed two planes into the World Trade Centre in an appalling act of violence. 2823 people died. We know each of their names.

Since then we have had wars in two countries thousands of miles from America. One of these countries (Iraq) had no connection whatsoever to the deaths above, but somehow the thirst for blood made invasion acceptable under a flag known as ‘the war on terror’. According to the website Iraq body count, between 115,000 and 120,000 civilians have died in Iraq since the invasion. They are nameless.

The other country (Afghanistan) was a traumatised mess of extremism, poverty and wilderness, long used to being the place where superpowers play out their war games. Bad people lived there, and it was time to take them out. It was time for pay back. Around 14,000 civilians have died there according to the Guardian. These too are nameless.

Of course, most of these deaths were not caused by American or British bombs and bullets. However, some most definitely were.

This is a ‘Reaper’ drone. Its name and appearance are straight from the pages of 2000AD. Reapers fly wherever they want to over Afghanistani and (even more controversially) Pakistani, Somalian and Yemeni airspace, seeking out targets. They are like airborne Judge Dredds, administering remote justice. Killing bad men. Avenging all those innocents that died in the towers. Surgically and clinically cutting away the canker of terror. It is a triumph of technology over tribalism, of wise investment over evil. Best of all it is clean and risk free to the good guys, who sit thousands of miles away in front of screens, using joysticks with big red buttons on top.

The article that brought all this back to me concerned a discussion about the numbers of civilian deaths caused by these machines. This has proved to be a rather difficult thing to estimate. Who is a combatant and who a civilian? Whose intelligence do we believe? Is that a gun on the grainy photograph or an umbrella? Add to that the fact that many of these attacks happen in remote and rural villages high in the mountains of Afghanistan and Pakistan, far from the eyes of the media.

And that discomfort rises in me again. How much death is enough? How much more bad blood can we cause?

So, who are these people who are being killed?

An organisation trying to shine some light onto the use of drones is The Bureau of Investigative Journalism. They estimate that the total numbers of people killed are around 2,523-3,621, of which around 416-948 were civilians– women, children, passers by, mistakes, regrettable casualties of war.

They are gathering a database called ‘naming the dead’, in which they try to tell the story of each confirmed death by these drone strikes. This is their rationale;

At launch, the Bureau is publishing in English and Urdu the names of over 550 people – both militants and civilians. This list will grow in the future.

Of the named individuals:

Naming the Dead builds on the Bureau’s two-year project tracking drone strikes in Pakistan and the numbers of people reportedly killed. This extensive research has found that at least 2,500 people have reportedly been killed, including at least 400 civilians. But almost nothing is known about the identities of these casualties.

The Obama administration has claimed that drones are a highly precise weapon that target al Qaeda and affiliated groups, while causing almost no civilian harm. But it does not publish its own account of who it believes has been killed. By gaining a clearer understanding of who is dying in drone strikes the Bureau aims to inform the debate around the effectiveness of the US’s use of drones – and around this rapidly evolving weapons system.

Are we happy to leave the future of our planet in the hands of Judge Dredd? If not, let us remember that killing people by remote video game leads only to a devaluation of human life. Lord have mercy on us.

By way of my small protest, here is one of the stories taken from the Naming the Dead website;

Little is known of Bibi Mamana’s life except that she was in her 60s, a grandmother, the wife of the retired headmaster of the Government High School in Miranshah, and a midwife who ‘delivered hundreds of babies‘ in her community. However the events immediately around her death have been well documented.

According to detailed reporting in The Times and the BBC’s Panorama programme, among others. For days before the strike there had been the constant hum of drones overhead, it was reported. Mamana and several of her grandchildren were outside the family home. She was picking okra, gathering wood for Eid al Adha tending to livestock when a drone struck.

It is not clear how many missiles were fired. But Mamana’s eight-year-old granddaughter Nabeela (aka Mabeela Rehman) was 20m away from where they hit. She told The Times: ‘I saw the first two missiles coming through the air… They were following each other with fire at the back. When they hit the ground, there was a loud noise. After that I don’t remember anything.’ Nabeela was injured by flying shrapnel.

At the sound of the explosion, Mamana’s grandson Kaleem (aka Kaleemur or Kaleemullah), 18, ran from the house to help his grandmother. But five to seven minutes later the drones struck again, he told the BBC. He was knocked unconscious. His leg was badly broken and damaged by shrapnel, and needed surgery.

Atiq, 38, Nabeela’s father and Mamana’s son, was in or was leaving a mosque at the time of the attack. On hearing the blast and seeing the plume of smoke he rushed to the scene. When he arrived he could not see any sign of his mother, he told The Times. He said: ‘My relatives arrived and urged me not to go too close. I started calling out for her but there was no reply. Then I saw her shoes. We found her mutilated body a short time afterwards. It had been thrown quite a long distance away by the blast and it was in pieces. We collected many different parts from the field and put a turban over her body.’

Atiq’s brother Rafiq was also away from the house when the missiles hit. He arrived as Mamana’s grave was being dug. Her body was already in a coffin. He told the BBC: ‘I threw myself over her coffin but the box was closed. The family told me not to open it as she had been hit by a missile and her body was in pieces.’

Family members hit in the same blast made the eight-hour bus journey to Peshawar for medical treatment. While there, Atiq showed The Times his mother’s identity card. The family then travelled on to Islamabad for specialist help. There Rafiq showed the BBC Mamana’s passport, pictures of her grave, the spot where they say the missile hit and fragments of the missile.

Rafiq told Al Jazeera English he received a letter after the strike from a Pakistani official which said the attack was a US drone strike and Bibi was innocent. But nothing more came of it, Rafiq said.