I know, it has been a bit of a theme recently; increasing inequality and the inevitable rise of poverty as the 1% grab more, whilst reframing the economic narrative around ‘austerity’ and creating fear of feckless insiders (benefits scroungers) and the undeserving outsiders (immigrants.)

The story of the decision of the UK government to cease involvement in rescuing immigrants from drowning in the Mediterranean sea has to be seen within this overarching narrative. We can send troops to fight Islamic militants in the (oil rich) middle east but saving the lives of people who are trying desperately to find a way to reach the promised land of wealth and opportunity will only ‘encourage more people to come’. More than 2,500 people are known to have drowned or gone missing in the Mediterranean since the start of the year; who knows what the real number is. The point is, not all lives are equal.

Some of the old dividing lines seem more fixed now than ever; North/South. Black/White. Man/Woman.

The me-first mythologies behind understanding poverty, in which we come to believe that any measures to tip the balance back towards the have-not’s are somehow immoral, as they might somehow undermine human endevour/entrepreneurial effort, are pernicious heresies that have to be challenged.

Oxfam has started a new campaign, called Even it up, asking campaigners in 37 countries to unite behind the call for a more equal world.

How is it fair that a select few have more money than they could spend in several lifetimes, while millions of people around the world struggle to buy food for their families or send their children to school? Such extreme inequality is threatening to undo much of the progress made over the past 20 years in tackling poverty. Oxfam say that this inequality is not inevitable, rather is the consequence of economic and political choices being made in our name. Here are some of the facts as Oxfam sees them;

1. The world’s richest 85 people have as much wealth as the poorest half of humanity / half of the world
2. Since the financial crisis the number of billionaires has more than doubled and at least a million mothers died in childbirth.
3. Half a million dollars. That’s what the richest 85 people made every minute last year.
4. Today there are 16 billionaires in sub-Saharan Africa, alongside the 358 million people living in extreme poverty
5. Seven out of ten people live in countries where the gap between rich and poor has grown in the last 30 years.
6. A third of the world’s richest people amassed their wealth not through hard work, but through inheritance.
8. Every year, 100 million people are pushed into poverty because they have to pay for health care.
9. Getting all girls into primary school could cut the number of women dying in childbirth by two-thirds.
10. More than half of the world’s workers are in vulnerable or unstable work.
11. Without action it will take 75 years to achieve equal pay between men and women.
12. In 2013, tax dodging by rich elites cost the world at least €156 billion – enough to end extreme poverty twice over.
14. Developing countries lose billions of dollars due to corporate tax dodging.
15. Today, a small tax of 1.5% on billionaires could get every child into school and deliver health services in the poorest countries. 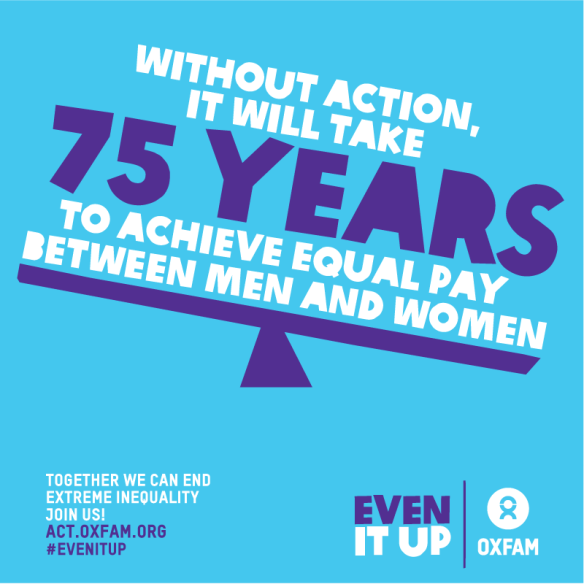 2 thoughts on “Talking about inequality again…”