I am reading Owen Jones’ ‘Chavs’ at the moment. It was loaned to us by a friend but despite their recommendations my expectations were low becaue I tend to skim past Jones’ columns in The Guardian. Half a book later, here I am to say I was wrong. It is a book that we need to read; a necessary, prescient mirror to hold up in front of a British society that has lost any sense of the injustice at rampant, growing inequality, and has replaced it with pervasive negative stereotypes that can rightly only be called demonsation.

Jones charts this through social media, through the virulent portrayal in press, film, music and television and of course, in post-Thatcher politics, both Tory and New Labour. Think of Waynetta Slob or Shameless. Think of the ‘Skyvers not Strivers’, think of the rise of the middle class as a social ideal. Now try to think of one positive image of working people from recent times. To be working class, it seems, should induce shame- as surely otherwise your aspiration would have allowed you to become middle class. If you are still working class, then you are scum. You are a Chav.

Not that we ever talk about class any more. Most 20th C social policy was dominated by analysis of how social class systems shaped and dictated life paths for good and ill, but it is as if this vast body of social research never happened. Inequality is no longer a political imperative. It has been replaced by the relentless pursuit of wealth and profit…

But, I need to stop ranting because there was another moment in this book that brought me up short- one that described how the liberal left might have joined in with all the Chav hate. 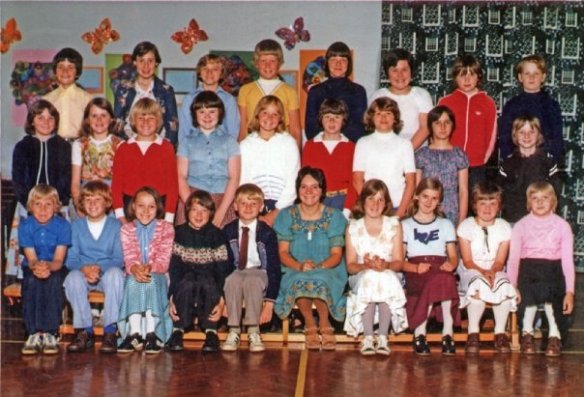 I should start with my own confession. I have spent my whole life working on my own personal escape plan from where I came from. Here I am above, back row in yellow, with bowl-haircut, from my primary school days. I was the second child of a single mother, entirely dependent on state hand-outs. My absent father was an Irish road worker but both his start in life and my mothers were much worse than mine. We lived in a nice house and never went hungry. Sure, we were ‘different’ from other kids, marked out by our clothes, shoes and our lack of foreign holidays but at the same time, there were always presents at Christmas and birthdays, piano lessons and pressure to succeed at school. Despite this, embarrassment and shame was a dominant part of my becoming.

Small wonder then that I did my best to hide my background. I told small lies about our lack of ‘things’ that seemed to be social markers. I tried to speak with a neutral accent. I went to church youth clubs full of middle class kids. I did enough schooling to become a graduate, via a third class Polytechnic. I ended up working as a social worker, where I inevitably ended up looking down at where I came from with the perspective of one who is no longer like them, but has now become something else. Someone else. No longer working class. I had managed to hide my inner Chav.

There is of course another way to characterise my rise into middle-class respectability. I might be better understood to be the poster boy for meritocracy. Perhaps I escaped because I was better than those who did not. Perhaps I worked harder than those who did not. This feels like bullshit though because the Chav is still with me. The shame is still in me. This despite the fact that I grew up in the late 70’s and 80’s, a much more benign time to be living on benefits than we are living through now.

In reading Owen Jones book, I realised something else though- my own prejudice against working people. In ‘escaping’, I promoted myself. I was not like them. They were racist, sexist unthinking football-crazed yobs who drank too much and lived in dirty conditions. Of course, they were not all like that, but even those that were not were not like me. I think this contributed to a certain kind of alienation and displacement in my life because I was not like the middle class either. I lacked the confidence, ease and security that characterised most of my peers. I was cast as observer, participating only at the edges. Either way, despite my liberation theology/ left wing leanings, perhaps I have to acknowledge that I have done my share of unconscious demonising.

Does this matter? It is not as though I have ever indulged in any of that daily mail rabid Chav hate.

Yes. I think it does. There needs to be a corrective, which has to start in us if it is to become a movement.

Perhaps this film says it all.

1 thought on “The demonisation of the working class…”