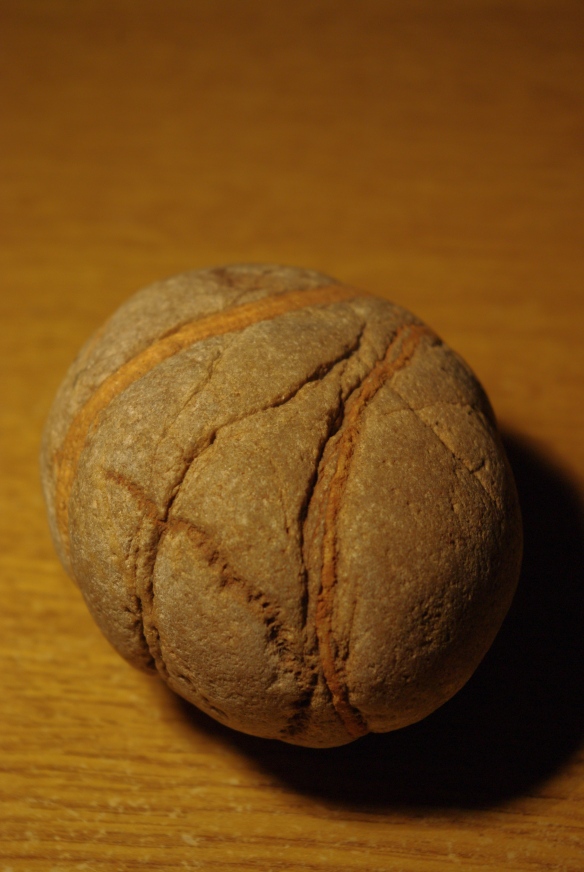 Our housegroup met tonight- as we do every Tuesday.  A smaller group than usual, just 7 of us. We have been reading through the Gospel of Mark and talking and debating the meaning of these wonderful stories. Encountering again the words of Jesus, recorded by someone who was right there to hear them spoken…

I needed to be there tonight more than usual. I was tired and weary, with a familiar weight on my soul that I feel like a band around my chest. Nothing dramatic- nothing unexpected, just the old black dog reasserting himself and shadowing me again for a while. A window given by a combination of circumstance and vulnerabilities that never quite go away.

Before we began to read, we spent some time in a simple meditation. We sat around a table on which were stones and rocks brought in from the garden, a small cross and a jug of water and glasses to drink from.  Audrey read these familliar words from Matthew 11-

Come to me, all you who are weary and burdened, and I will give you rest. Take my yoke upon you and learn from me, for I am gentle and humble in heart, and you will find rest for your souls. For my yoke is easy and my burden is light.

We were then invited to take a stone and consider the burdens we were carrying. And to deliberately lay them down at the foot of the cross.

Next, it was suggested that we drink in water, as a sign of God’s promise to bring life and refreshment- to fill us with living water.

But I rebelled a little. I did not want to lay down my stone. The more I looked at it, the more fascinated I was by the shape in it- which was entirely natural- cracks revealed as the stone was eroded by the action of waves on the beach we picked it up on.

What was I looking at?

Initially it looked as though I was looking at a man- and I wondered if this somehow symbolised a person.

But then I realised that the markings on the rock actually looked like a man with his arms and legs wrapped around a huge burden- and that in fact, they were carrying this burden.

Almost like they had taken on the weight of others…

It seemed to me that there was a message here of promise- or perhaps a reminder of a promise. My burden is being carried- not by me, although I easily labour under the weight of it. Rather the burden is being borne by someone else. Leaving me with the possibility of lightness and freedom. Because he is gentle and humble in heart…

This life of faith is wrapped up in mystery and doubt, or at least it is for me. But today I hold in my hand a solid sermon in stone.

And for those of us who look for doubt- we will find it.

But we should also consider this. At some point, we picked up a few stones on a beach, and left them in our garden amongst a rockery. There are thousands of stones there. Michaela gathered a few, and as part of a meditation, at a time of need, I picked up this very one…

Or- a God who seeks after us, despite everything?