It’s all a bit an anti climax.

No rapture after all.

Might have been nice to rise with a trump and fly…

But what do you do if you are a preacher, famous the world over for your predictions- made with resounding certainty- and you are proved, well- resoundingly wrong?

Perhaps you just pick a different date- certainly, that is what Harold Camping did last time- in September 2004. 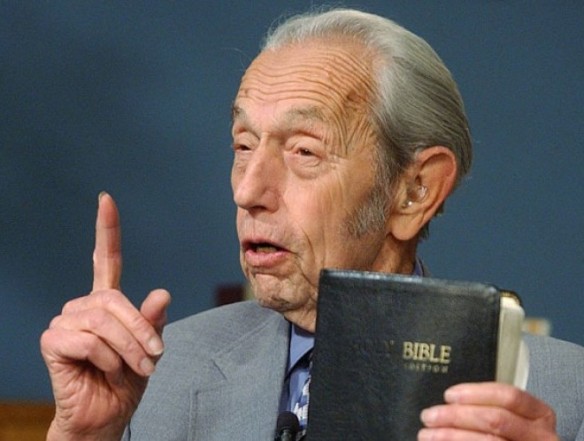 What amazes me is the degree to which people who are caught up in the madness of all this seem to keep faith with men like Camping- whose credibility seems to be able to survive such obvious false prophetic utterances. All that ‘infallible word from God‘ nonsense. They used to stone prophets that were proved false in the old days…

Not that Camping is unique- I have written before about my own memories of this kind of stuff from childhood- when Chuck Smith was making his predictions. It did not seem to do him any harm either. There is a list of other predictors in this post.

There was that recent survey result that suggested that over 5o% of Americans believe that the faithful will be taken up to heaven in a Rapture event, so you can bet that this camp is pretty large. Sixty million of them have read the ‘Left Behind’ Tim la Haye books after all.

We can not predict the time of these events, they would say- Jesus said that you would not know the ‘day nor the hour’ of his return (but I knew a man who claimed to know the month and the week!) So predictions are futile- whereas a general prediction about us being in the ‘end times’ and a rapture being likely within our lifetime- this is more ‘mainstream’ a prediction.

The ‘Book of Revelations as allegory’ camp…

This group understand the writings of the Book of Revelation in a very different way. Rather than seeing it all as a description of wild future events, they would suggest that it was a coded attack on the times and context of the writer- the 1st/2nd C Roman Empire. These people hoped and believed that Jesus was about to return.

They would suggest that those who read now should seek to apply the critique of this powerful but bizarre imagery to our own society- but not as a means of opting out, rather as a means to hope for the Kingdom of God to be revealed here and now.

NT Wright talks about this here. He differentiates between the Apocalyptic language- using cosmic language to invest historical events with their full significance, and; “apocalypticism” which is a means by which people use these ideas to conjure up dire predictions about the end of it all.

Apocolypticism is a way for us to split everything into two again- the in and the out. The good and the bad. The heavenly and the earthly. Or as NT Wright puts it-

I will leave you to guess which camp I belong to!

What is left to ask about all this end times stuff is this- ‘What does it say about western society (or American society at least) that men like Camping can still hold such influence?’

Might it mean that (as NT Wright puts it) the dreams cherished by our culture for 200 years or more have let us down?  Capitalism gave us rampant consumerism and boom and bust. Science gave us global warming and nuclear weapons. Democracy gave us stable power hierarchies (we used to call it ‘class’) that are remarkably resilient and difficult to change.

Faced with this crisis in our ability to hope and believe for the future, we people of faith have a choice- along the lines of the camps above.

We can proclaim the end of it all, and offer only the hope of a few of us being sucked away from the stinking rotten corpse that is this world, or we can become hopeful critical collaborators in our culture- salting those things that have good flavour, and shining light where there is darkness that requires illumination.

4 thoughts on “What do you do if you predict the second coming- but get it wrong?”