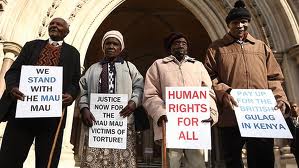 We Brits still think of ourselves less as militaristic colonisers, more as civilisers- as if the mission of our Victorian forebear to the rest of the world was to instill stiff upper lips, courts of justice and the gentility of cricket.

Stories this week have revealed some of the bloody ragged edge of Empire however, as the British Government have finally admitted some of the brutality done by ‘our boys’ in our name upon the people of Kenya in the 1950s.

Most of these stories take some believing. Rape, including rape with bottles. Torture. Slaughter of men women and children. All done by British soldiers- not in the context of global struggle, but in a long line of brutality aimed at people regarded as ‘less than’, as savages.

Dig a little further back into the history of British intervention in Kenya and it all makes sense. This from Wikipedia;

Britain’s presence in Kenya was marked by dispossession and violence. In 1894, British MP Charles Dilke had observed in the House of Commons: “The only person who has up to the present time benefited from our enterprise in the heart of Africa has been Mr. Hiram Maxim“,[23]though such a state of affairs was in accordance with insistence of Arthur Hardinge, the first commissioner of British East Africa,[24] that “[t]hese people must learn submission by bullets—it is the only school . . . In Africa to have peace you must first teach obedience and the only person who teaches the lesson properly is the sword.”[25] During the period in which Kenya’s interior was being forcibly opened up for British settlement, Francis Hall, an officer in the Imperial British East Africa Company and after whom Fort Hall was named, asserted: “There is only one way to improve the Wakikuyu [and] that is wipe them out; I should be only too delighted to do so, but we have to depend on them for food supplies”,[26] and colonial officers such as Richard Meinertzhagenwrote of how, on occasion, they massacred Kikuyu by the hundred.[27]

For the next 60 years or so, the Kenyan people were slaughtered, oppressed, lost land, lifestock, economic power, and found themselves less than serfs, working on the farms and plantations of the British. After the second world war, attempts were made to set up a government, but there was never a chance that this would be fair and just;

In May 1951, the British Colonial Secretary, James Griffiths, visited Kenya, where the Kenyan African Union presented him with a list of demands ranging from the removal of alleged discriminatory legislation to the inclusion of 12 elected black representatives on the Legislative Council that governed the colony’s affairs.[Griffith proposed a Legislative Council in which the 30,000 white settlers received 14 representatives, the 100,000 Asians (mostly from South Asia got six, the 24,000 Arabs one, and the 5,000,000 Africans five representatives to be nominated by the government.

In this struggle- whose side would you be on? Where is justice? Not with we Brits that is for sure. No surprise then that when violence erupted it was necessary to dehumanise;

The official British explanation of the revolt did not include the insights of agrarian and agricultural experts, of economists and historians, or even of Europeans who had spent a long period living amongst the Kikuyu such as Louis Leakey. Not for the first time,[81] the British instead relied on the purported insights of the ethnopsychiatrist; with Mau Mau, it would fall to Dr. John Colin Carothers to perform the desired analysis. This ethnopsychiatric explanation would infect everything, from British psychological warfare, which painted Mau Mau as “an irrational force of evil, dominated by bestial impulses and influenced by world communism”, to the later official study of the uprising, the Corfield Report.[82]

The psychological war became of critical importance to military and civilian leaders, who waged it in the time-honoured colonial fashion of divide and rule, always trying to “emphasise that there was in effect a civil war, and that the struggle was not black versus white”, attempting to isolate Mau Mau from the Kikuyu, and the Kikuyu from the rest of the colony’s population and the world outside. In driving a wedge between Mau Mau and the Kikuyu generally, these propaganda efforts essentially played no role, though they could apparently claim an important contribution to the isolation of Mau Mau from the non-Kikuyu sections of the population.[83]

…The savagery of the British response was inflated by two factors. First, the settler regime in Kenya was, even before the insurgency, probably the most openly racist one in the British empire, with the settlers’ violent prejudice attended by an uncompromising determination to retain their grip on power[112] and half-submerged fears that, as a tiny minority, they could be overwhelmed by the indigenous population.[113] A common view among the settler community was that “[a] good sound system of compulsory labour would do more to raise the nigger in five years than all the millions that have been sunk in missionary efforts for the last fifty”,[114] and its representatives were so keen on aggressive action that George Erskine referred to them as “the White Mau Mau”.[113]Second, the brutality of Mau Mau attacks on civilians made it easy for the movement’s opponents—even for African and loyalist security forces—to adopt a totally dehumanised view of Mau Mau adherents.[112

This savagery is now a fact of historical record rather than debate- check out the rest of the Wikipedia article. 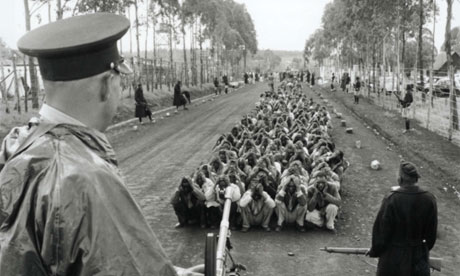 Why is this relevant now?

Unless we learn from history- and confront what made us what we are – we simply repeat it.

There is no doubt in my mind that Christian missionary activity in Kenya was part of an oppressive colonial regime. It had little to do with the Kingdom if Heaven and everything to do with empire. May God forgive us.

Britain has set itself in allegiance with the USA, the current dominant colonial power in the world- although these days colonialism is more easily understood as globalised capital. We believe ourselves to have moral authority, even after the mess of Iraq and Afghanistan- so that we should police the troubled parts of the world.

Kenya tells us much about the way that other parts of the world see us- and I reckon that this is the tip of the colonial ice berg. Once you start looking through the eyes of the oppressed, empire looks very different.

6 thoughts on “A flashback to our colonial legacy…”