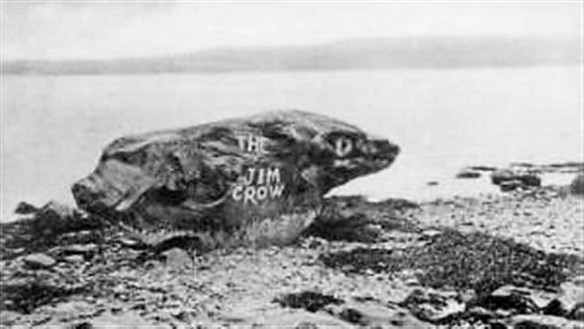 Following on from yesterdays post, I sent a letter to our local paper. This is not something I make a habit of- in fact this will only be the second such letter I have sent. The previous one was not published- and was triggered by the same issue.

At that point I took exception to a rather poorly researched story in the paper after the rock’s Golliwog face has been painted over by a protester. (NO- it was not me, although some of me wishes it was.) It made no reference whatsoever to the Blackface tradition, nor to the objections raised to the decoration on the rock by others, not least the Racial Equality Unit.

Today I sent this to the editor. I am expecting a backlash- lots of people will be very angry. However, I walk past this stone several times a day, and each time it makes slightly ashamed.

The death of Nelson Mandela seems like a very good time to take another look at some of our own racist history. In doing so we very soon have to concede that the prosperity of this area owes much to international trade; shipping, sugar, tobacco and slavery. It is to the credit of Britain that as well as participating in slave trading we did much to end this practice at the beginning of the 19th Century. However, many would argue that we replaced slavery with Colonialism.

Alongside this, our attitudes towards the non-white people of the world has often been to view them as less-than. We supported this with entrenched prejudice and even with the so called ‘science’ of eugenics. These ideas found expression in our politics (segregation, apartheid) and also in our popular culture.

One of the most pervasive cultural carriers of this prejudice were the ‘Blackface’ caricatures that developed the world over- the Golliwogs, the Minstrel shows, Zvarte Piet and Jim Crow. Understanding how these have been a channel for racism is not easy, but they are commonly understood to allow culture to reduce the feared outsider to a figure of derision. A feckless, chicken loving, sexualised layabout who steals washing from the line, but is good at singing and dancing.

Which brings us to our own Jim Crow Rock, Only in Argyll does anyone seriously suggest that this has no racist origins. The Jim Crow museum in the USA expressed horror, the Racial Equality Unit is clear about its ‘Blackface’ beginnings, outsiders stand and look puzzled. When confronted with these outside perspectives, our response has often been to become angry and defensive, refusing to engage in any real discussion about the origins of the rock.

So, here is a suggestion; as a memorial to the late great Nelson Mandela, why do we not invest in an information board on the foreshore next to the rock? It could say some of these things;

It could acknowledge the local controversy, and disagreements about the origins of the decoration. It could deal with the role of the Clyde in the slave trade. It could talk about Blackface caricatures and the minstrel shows that were performed here in Dunoon’s heyday. It could talk about the Jim Crow Laws in America, and how they enforced segregation, prejudice and apartheid.

Above all, it could transform a local curiosity from something that is at best controversial (if not downright offensive) into something that we can all feel pride in the ownership of once more.