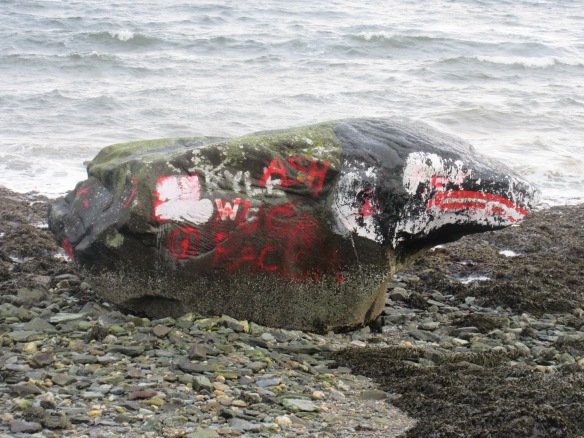 I post this with no sense of triumph, despite my previously stated concerns over the last ten years.

Thanks to a recent intervention by the father of the late Stephen Lawrence, the national spotlight was once more on the rock and this time, local opinion was shaken and the tide began to turn. One night, someone covered the rock with a different kind of graffiti.

The rock is a mess, but some of us might still regard it as an improvement on what was there before. It might surprise you to know that I am not one of these, for this reason;

The rock has been decorated with blackface imagery for over one hundred years. There have been numerous attempts to complain about this, each time the complainant was repulsed by local opinion, by local ‘historians’. Political representatives (not the current ones I hasten to add!) have publicly defended the rock as not racist and called for previous (less colourful) defacers of the blackface images to be pursued as vandals. It has also been repainted several times, arguably with images even closer to the golliwog of youthful memory. Perhaps it might yet be repainted again, but for now, it has gone.

It would be the natural thing for those of us who live here to want to hide this history, and pretend it never happened, but no matter what happens to this rock, it’s history remains. Whether we chose to acknowledge our history, it still forms us.

Therefore, glad that I am that we have reached a moment when we are confronted with this history, there is a danger that we sanitise it rather than use it to inform. It is easier to try forget than to engage with what we were, particularly when that involves a measure of healthy shame.

So, I want to give my voice to a call to place an information board on the sea front. I invite others to join me in this call. I would even go as far as to suggest some content;

Because although the tide might have turned, it is only a few hours until it turns again, and who knows what those waters might bring…

1 thought on “The tide turns again on Jim Crow…”