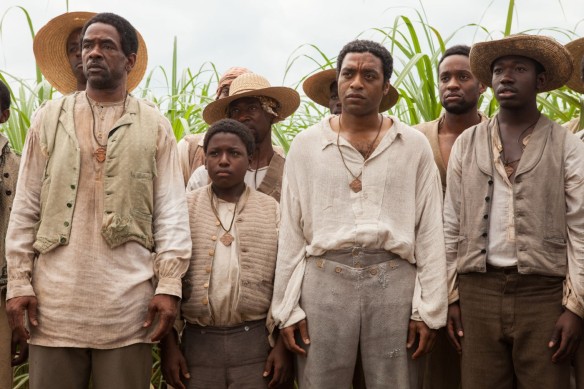 I have just been to the cinema to watch 12 years a slave.

It is a great film- exposing the raw underbelly of the racism that was a formational part of the development of the nation that became the USA. It has to be said that we on this side of the Atlantic are ultimately culpable, but our convulsions in relation to racial equality have been more subtle on the whole.

Think about it though- slavery is entangled with much of our society that might be regarded as our sickness- our addictions to tobacco and sugar, our morning coffee pick me ups. The slavery age set the tone for the rapid economic expansion based on huge profits for an elite. In many ways we all stand on the backs of slaves.

What the film did quite well was to convey how ‘good’ people could come to accommodate such a great evil as slavery- how they regarded black people as less-than. Even there however, I found myself wondering if the film was guilty of showing us the drama through a set of goggles that were entirely of our age- it is impossible not to engage with these black actors as wholly rounded emotional beings, which is of course something that was almost impossible to do from a 19th C perspective.

The film also seemed to show two Americas- the evil South, and the north in which black people lived in nice middle class houses and had the respect of all their peers.

History teaches something slightly different- about how pervasive the imagery of the chicken loving, feckless, sexualised, untrustworthy and unclean negro had become. This stain on blackness spread all over the world- including the free states. Black people were not chained, but neither were they regarded as equal partners. This was true also in my country.

Some would argue that this remains the case today- demonstrated by just about every social statistic you care to examine- educational and vocational achievement, health, mental health, prison numbers, poverty, life expectancy etc etc.

What is it then that makes race such a stubborn social discriminator? Why should the colour of our skin really make any difference to all the things listed above? In the past eugenicists argued it was simply because black people were lower down the evolutionary ladder- they were closer to the monkeys, and therefore good at sport, but not as intelligent as the rest of us. Despite the science of eugenics having been shown to be totally bankrupt, the conclusions peddled by this despicable chapter in the history of science still has resonance with instinctive prejudices that people carry.

There was a point in the film (slight spoiler alert!) where Solomon is free, and standing in front of his family. It is no moment of triumph- rather he is broken, weeping. He has been nothing and he has come to believe this of himself. He has nothing to offer his family as he is nothing.

This is what prejudice does to us- it erodes our sense of self. This is what the ruling classes can never quite understand about the poor. The current discussion about ‘benefits scroungers’ in the UK seems to involve a government made up of privileged people asking why are these people living like this? Why do they not get up and get on? What is wrong with them? They fail entirely to understand the denuding impact of poverty and prejudice on body and mind. From their perspective of ‘everything has always been possible’ they have no concept of how people can become so restricted by circumstance.

American literature has been trying to understand this phenomenon in relation to race for many generations now- from Harriet Beecher Stowe’s Uncle Tom, through Mark Twain’s Tom Sawyer and Huckleberry Finn, onwards into Alex Haley’s Roots. It has always felt like the nation is lagging behind the literature. Perhaps this generation might be the one to finally put away the prejudice, but is seems we still have a long way to go.

We came out of the cinema today and immediately thought of our local murky past- symbolised by Jim Crow Rock.

I maintain that these things matter, because even though the physical chains have been taken off, there are still many hidden chains that are laced through our societies. Changing this is the work of centuries.

What a day. Will turned 21, and as all the party stuff is not really possible, instead we invested in future musical gatherings and bought him a new guitar. Then, because we were in Glasgow, Emily also went to the violin shop and bought a 'new' violin, which was made in Dundee back in 1856. The music has come full circle.
@potfest.co.uk day 2. The calm begot the storm... We had a great day yesterday, with some fantastic conversations. Here's to more to come today. @seatreeargyll
One of the joys of exhibiting at #potfestscotland is that after the mad day setting up your stall, you can wander the beautiful Scone Palace gardens.
Mum and son afloat
It's that time of year again. This flower always reminds me of the friend you have us them. Thanks @seidelhood xx
This is our 'competition' piece for Potfest. I really like it, which I can say without boasting cos it was all Michaela's work, bar the mounting.
This morning, bread. This afternoon, gardening... Or beer?
She is almost perfect, is my wife, but spot the slight mistake!
Today I played a game of actual cricket.
Working on boats always seems to create such a mess. In this instance we out Will's boat on the hard to change a sea cock, take out and seal a window, then install solar panels. Fitted in a couple of beers with me boy and a live Chris Drever/John McCusker gig via zoom too.