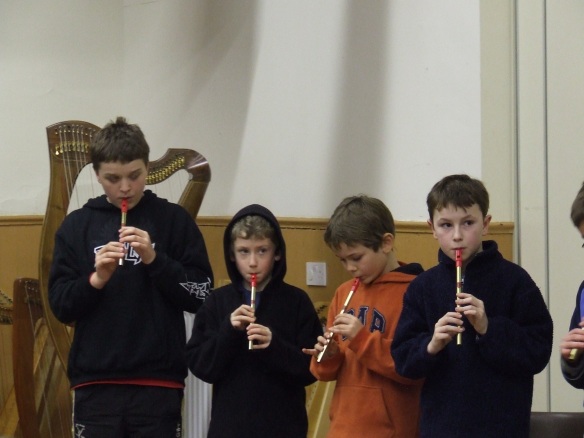 Will with hood up

He has had a ball- lessons on the Clarsach (hence the photo in the earlier post) the fiddle, and whistle, as well as Gaelic singing and pecussion.

He also had a chance to do a high ropes course, go out on a high speed boat, and shoot arrows. We missed him, but he had loads of fun.

We went to fetch him this afternoon, and to watch some of the kids put on a bit of a show. It was great to see so much enthusiasm for making music- which I think is one of those key things that holds communities together. Because Will is at a Gaelic unit in school, he has a chance to get involved in all sorts of Scottish cultural events- and it gives us such pleasure to see him soaking into the stuff of our adopted land.

A few weeks ago he went to a Celtic connections event with school, and seemed to pick up a hero in young singer Norrie MacIver, accordionist, beatboxer and member of the band Bodega. Norrie was one of the tutors at the Feis, and Will has come back full of enthusiasm- wanting to take up learning an instrument again. Thanks Norrie! We all need role models, and people to draw us on…

The weather was dreadful though! The drive down the spectacular Hells Glen is always a challenge- and when there is snow on the road it can be treacherous.

So here are some photos…

Will with hood up

Not a sight to savour- Hells Glen

view over Loch Fyne from near Gypsy ring

You can't rush plants. All you can do is appreciate the potential of freshly prepared ground.
New wheeze. Strawberry planter made old kitchen bin and some waste drain pipe.
Table. Spill. Reflection.
Happy birthday to the love of my life.
Will up a tree in his dressing gown.
First leg of the journey taking Williams new home from Rosneath up to Oban.
There is a message here. Just not sure what it is.
This is a picture of an apple tree damaged by deer to the point where I thought it could not survive. A friend suggested I bind the wounds with moss to allow it to heal, and here it is a year later like a miracle.
Today's progress. ( And Emily in the shit yesterday. Thanks @sailingafraid
Out early, cold and clear, glad to be alive. Setting Tideforce on her way...