I read this today (courtesy of Minimergent)

Spirituality requires context. Always. Boundaries, borders, limits. ‘The Word became flesh and dwelt among us.’ No one becomes exalted by ascending in a gloriously colored hot-air balloon. Mature spirituality requires askesis, a training program custom-designed for each individual-in-community, and then continuously monitored and adapted as development takes place and conditions vary. It can never be mechanically imposed from without; it must be organically grown in locale. Askesis must be context sensitive.

Under the Unpredictable Plant

I have been asking myself whether I agree with this- whether it is only possible to make a spiritual journey within defined boundaries. Because I suppose that defined boundaries in this case could also be described as ‘religion’.

My thought so far is that Peterson is probably right- it is just that I prefer my boundary fences to be like the one above- present in symbolic form mostly, used as a guide when the mist comes down but for the most part a set of posts that I can meander in and out of whilst looking towards the big picture beyond. 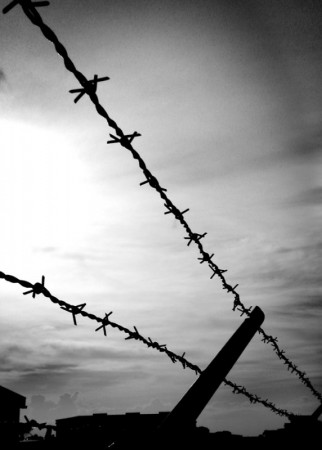 I have this thing about boundaries and borders.

They are such artificial things. They are constructs of history, of politics, of tribalism- both ancient and modern.

They seem to represent to worst of us- the attacking and defending, the in-outing, the asylum seeking and the last refuges of scoundrels.

They seem to me to be the visible manifestation of our o-so human characteristic of constructing walls to hide behind and throw stones from. We do it in the playground, and in our theology. We do it in our politics and over our suburban garden fences.

Safe behind these walls we construct, it is possible to make generalisations about the dwellers on the other side. It is likely that we will be skewed towards constructing a reality that is only partially based on fact, and serves to somehow strengthen the boundaries about us. If your failings are evident, mine submerge. If your history and culture can be caricatured and undermined, then ours will be all the stronger. If you are worth less, then what you have, I can take.

There is a lot of discussion around at the moment about Britishness. Our (Scottish) prime minister has made it a central part of his message- perhaps (he says cynically) as a reaction to the rise of the Scottish National Party in his native land. Check out this programme on Radio 4, complete with interview with the Prime minister.

In this programme, there is a discussion about Scottish Nationalism. As an English/Irishman, living in Scotland, and trying to understand what it means to follow Jesus in this time and place, some of this debate troubles me.

If you have an English accent, you can’t say this stuff- you have no right.

You are from the other side of the fence you see- the oppressive, domineering, 1966-boasting, Redcoat-wearing, clearance making, absentee landlord side…

Except, I am the son of an Irish man, the result of his brief marriage to the daughter of a miner. I grew up in a northern England ravaged by the end of industry- in the middle of a miners strike and about as far removed from the City of London as it was possible to get and still be rained on.

Anyway- back to Scottish nationalism. A couple of years ago, I listened to Doug Gay’s talk at Greenbelt entitled

‘Breaking up Britain- how to be a Christian Nationalist’. I really struggled with it at the time, but it was provocative and well presented, and gave me much food for thought.

But I rather thought the point of the Babel story was about mankind getting too big for it’s boots- and the whole Israel thing- well it did not end well did it?

I have a number of difficulties too about nationalism-

So, for those of us who agree with Tom Stoppard’s suggestion that nationhood is perhaps just a ‘conspiracy of cartographers’- perhaps we can hope that there may yet be a new way to celebrate our nationhood…

I love my adopted country of Scotland. But let us seek to tear down borders, not find new ways to erect them.

In case we ever doubted it, the life force within us (which I have come to think of as the Christ, courtesy of the writings of Richard Rohr) is the most powerful force in the universe.
A trek up Kilbride hill today. Slightly off my usual stomping ground, the change enforced by continuing forestry work above our house. Nice views though, looking up River towards Dumbarton. There used to be a cross here, stepped in these rocks. I was surprised to find that I missed it.
Fort Victoria coming in. The sun going down. Lovely evening...
The rusty creativity of people who know how to use steel on the sea.
We drove home from England the slow way yesterday, driving across Hadrian's wall, and stopping for a while at Hexham. Here are some images taken in the Abbey. What a fantastic, lovely building. There is a crypt which dates back to the seventh C, lost for a thousand years after the Vikings did their worst. The walls of the crypt include carved stones taken from Roman villas and temples which were already ancient. After a few days dealing with family illness, it was good for the soul to take the long view...
Nice weather for a crossing. #westernferries
Spent the afternoon in the polytunnel, weeding, testing soil pH and dreaming of the coming spring. There is no better way to see off the dark shadows of winter.
Ignoring the signs (all the forest munching machines have taken a Christmas break) I took to the hills in the rain. A long walk under a good hood is a fine thing for contemplation as the year starts to turn. By the way, the trees are being felled in order to control a disease that is spreading through larch plantations like wild fire. Makes you wonder if this is another inevitable side effect of contour planted mono culture? Another argument for rewilding.
A Christmas Nativity scene. Coming to a sofa near you