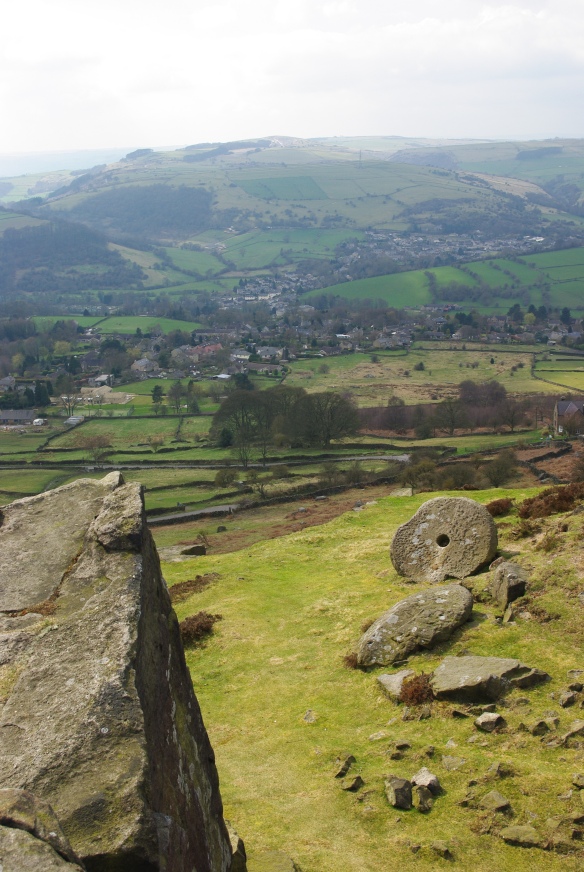 I have spent much of my adult life looking upwards towards mountains, longing to be lost in the shape of them. This started out in the crowded landscape of the Peak District, chewed and nibbled by quarries and industry, leaving only the millstone edges and the heavy dark peak with their wet peat wrapping of dead forest. It progressed to the cosy mountains of the Lake District– bare crags and scree spitting like broken teeth from the bare grasslands. Nowadays I have the high places of Scotland, path-less and unforgiving, untidy with scrub, alive with deer and ticks.

What I am just coming to realise is that these beautiful landscapes are anything but wild. Sure, it was more obvious with the first two of my places of adventure, but it is even true of Scotland. George Monbiot (rapidly becoming a real hero/prophet to lefties like me) is about to publish a book on Re-wilding and the impact of farming practices on our ecology. Once you look at the British landscape through these eyes, you will never quite look at it the same way again.

Could it be that those rolling hills and high mountains that have beckoned me all my life are actually barren wastelands created by the depletion of almost every indigenous ecosystem? A wasteland created and sustained above all by our agricultural practices and supported by vast amounts of public money in the form of subsidies?

Monbiot suggests that we do not see this because of the myths that we have adopted as fact about our landscape- myths that are so powerful that they have achieved some kind of stranglehold on politicians, ecologists and members of the public alike. Here is Monbiot in an interview with Steve Wheeler on the Dark Mountain blog;

Yes, that’s right, and in fact shifting baseline syndrome – the idea that what you experienced in your youth is the normal state of the ecosystem, and so conservation becomes an attempt to recreate the ecosystems that existed in your youth, oblivious to the fact that those ecosystems were themselves highly depleted – it’s that syndrome that is responsible for the dire state of conservation in this country. In some other parts of the world, too, but Britain is a particularly extreme case. There’s no other place on earth where conservationists are quite so frightened of nature, and where they try to such an extent to manage and suppress natural processes. There’s nowhere else where conservation so closely resembles a slightly modified form of farming, and that’s because conservationists, like everyone else, appear to be profoundly ignorant of what was here before farming, and what could be here without farming, so they focus on the species that have happened to survive 6,000 years of farming – which happen to be tough, weedy, rapidly reproducing, ‘R-selected’ rather than ‘K-selected’ in the jargon of ecologists, rather than the species that did live here and could live here again.

SW: It struck me, to be fair to some of these conservationists, that there’s a strong psychological reason when they talk about the dangers of undergrazing and so forth: there is a fairly messy phase that the ecology would need to go through before it became a rich, old growth forest, and that looks like stinging nettles or bracken, which to a lot of people elicits a reaction of: ‘Oh look, these weeds are coming here, this is a less beautiful landscape, this is less useful for the needs we wanted it for’. There’s a lack of faith and trust in the succession of species – that one stage needs to happen first and then the next colonisers will come and the next.

GM: Almost every stage is a stage of increasing richness over what was there before. Some of the upland sites are so impoverished, have so little life, that any recovery in terms of scrub, bracken, brambles, would actually mean an increase in biodiversity. It’s fascinating how almost every aspect of the discussion about what we’re trying to conserve and why has been completely distorted by our perceptions of the present overwhelming the past and the future.

For instance, conservationists will, with a straight face, assert that their grazed open grasslands are more biodiverse than woodland. You say ‘What do you mean?’ and they say ‘They’re more biodiverse’. And you ask which taxa they’re talking about and the answer is ‘flowers and butterflies’ – it’s always flowers and butterflies! So you say, ‘Yes, strange to relate, grasslands are more diverse in non-woodland species than woodlands are’. But they don’t see it, and they genuinely believe that more flowers and butterflies equals greater biodiversity in total, and ignore all the other taxa, whether they’re beetles, moths, spiders, mammals, birds, fungi… trees! – whatever they happen to be. All of those are ignored, because they only happen to see biodiversity in two groups.

Does it matter then? Are these places not still beautiful, vibrant, compelling? To stand high on the Cuillin ridge with clouds lapping your feet on one side, an clear air the other (as above) is still transcendent. The reality Monbiot wants to wake us up to however is that we have stopped looking at what we are losing. We have become transfixed by the ‘conservation’ of certain totemic species which we have preserved, even re-introduced; sea eagles, otters, beavers, salmon. At the same time the diversity of the wider eco-system is in terrible decline;

SW: You’ve been at pains to point out that you want to rewild the uplands but leave the lowlands for agricultural practice – albeit perhaps not as currently practiced, but generally. Do you think that kind of agriculture is sustainable?

GM: Well, it depends what you mean by sustainable, which is a term that has become almost meaningless. Can it be sustained? Probably, yes, if the phosphate doesn’t run out, which is probably a couple of hundred years off. But at great cost to the natural world, and already we see that cost in terms of the extraordinary losses of wildlife in almost every nation on earth, including our own. A remarkably rapid loss, such that even since my youth – which admittedly was quite a long time ago – there have been profound changes.

I remember when the riverbeds were so thick with eels migrating to the sea in the the autumn that they looked almost black, and now the european eel is a highly endangered species, there are very few of them left – it would have been inconceivable to me if someone has said that that would be the case. For some 10,000 years following the ice age there was this massive migration, and now it’s come to an end, just about. I remember on summer nights, the moths would pack the windows, so that you could scarcely see out, of all sort of colours and shapes and sizes, which was a wonderful adventure for a boy like me, just to log the species stuck to the window, trying to get in. Fields used to be covered in white mushrooms, all gone now, and that’s just in my lifetime.

And as I say, that was already a highly depleted ecosystem; but it’s been so radically depleted in that short amount of time, and largely by agriculture, so it’s plainly unsustainable in terms of maintaining even the barest scrapings of life. It might be sustainable in terms of preserving food production, but it depends where you are, we’re now seeing in the interior of the United States large areas rapidly becoming unsuitable for agriculture through a combination of climate change, aquifer depletion, and overuse of the soil.

If Monbiot is right- then what should we do about it? His radical suggestion is that we change the subsidy system away from supporting upland grazing towards re-wilding; simply put, we get out of nature’s way. Switch the subsidies towards permaculture, with proximal zones where we do nothing.

Farmers will not be pleased- many of them anyway. Some are living in marginal subsistence situations already. Others are reaping vast profits from the subsidy system.

How about people like me for whom our ‘wild’ places are a poetic adventure play ground? We might need to get used to far less tidy landscapes- I can tell you that it is MUCH easier to walk and climb in the Lake District than it is in Scotland- mostly because the former is much less ecologically diverse (even though Scotland is heading in the same direction.) A walk up Cat Bells with the crowds in their creaky new Gore Tex will convince you of this if anything will;

It is not that we did not enjoy the stiff climb, the uninterrupted views out over Derwent Water, the sound footing on constructed paths. However, we did not consider the bare slopes, accommodating of our exercise as they were, to be anything other than normal- which perhaps is exactly what they were.

What does it mean to us? Is it worth fighting to preserve? Do we think that our current economic systems can ever be trusted to do this?