Check out the trailer for this film;

There have been other attempts to scare people into faith by dodgy theological interpretations of the wild meanderings of the Apocalypse of John. I have written before about my childhood experiences in this regard.

Popular culture reflects the zeitgeist in ways that are often interesting. What emerges on to the entertainment market often reflects all sorts of subliminal fears, preoccupations and prejudices. In the American heartland, still dominated by Conservative Evangelical Christianity, this film will do well. Guns, fundamentalism and fear- surely this has to sell well even if the film making itself is rubbish?

Naomi Klein makes some interesting points about what she describes as ‘Rapture Rescue’. I have posted this before- but it is worth watching again;

Western society, despite our peace, prosperity, security and excess, still seem to define itself in terms of fear of catastrophe– be this some kind of real or imagined terrorist threat, a fear of immigration, of civil unrest. We then imagine some kind of massive redemptive transforming event to solve the problem- a new saviour, a victorious war, a wonder technology.

Add religion into the mix and things can get, well just silly. Except that when so many people are caught up in it all it is not really a laughing matter.

“If we want the transformation, we can’t wait for it to happen in some massive jolt, we have to plan for it and model it…”

“Only a crisis, actual or perceived produces real change, and when that change occurs this depends on the ideas that are lying around. That is our function, to keep ideas alive until the politically impossible becomes politically inevitable.”

My concerns about films like the one above are partly theological (there is a discussion of some of the dispensational theology in this post) although correcting esoteric theological ideas is always a bit of a waste of time. Those who hold them do so as if to a branch out from a cliff. They will never let go.

The issue is more relevant when we consider the impact of this kind of theology on our engagement with the world. Christians have some of the best ‘ideas’. We have a story that can change whole cultures- that HAS changed whole cultures. Sadly ideas and stories like this can become the servants of culture, not part of a critical, vitalising commentary.

So if our religion takes us to a place where we believe that this world is doomed, that God is going to suck all the good people (measured according to whether or not they have said the ‘sinners prayer’) up with his great rapture hoover and the rest will get their just deserts- if this is our religion then how might this change the power of our story or the potency of our ideas? How might these ideas set us free to be engaged in works of salvation- not just for a narrow self elected few?

That is why we need to hear other voices of faith- like Tom Wright;

Faced with an apparent crisis in our ability to hope and believe for the future, we people of faith have a choice…

We can proclaim the end of it all, and offer only the hope of a few of us being sucked away from the stinking rotten corpse that is this world, or we can become hopeful critical collaborators in our culture- salting those things that have good flavour, and shining light where there is darkness that requires illumination.

…we Christians have plenty of our own End Of The World doomsday predictors. Check out this list.

On the day when at very least the prediction made by the Mayan calendar that the world will end has been proved to be a slight miscalculation, it might be useful to reflect again on that word eschatology (not to be confused with Scatology) defined by Wikipedia as follows;

The Study of theology, physics, philosophy, and futurology concerned with what are believed to be the final events of history, the ultimate destiny of humanity — commonly referred to as the “end of the world” or “end time“

Note that this is serious business to many theologians in particular. It is big bookshelf time. Big argument time. Big business time. Why? Particularly when the subjects of study have little to do with the environmental/political/economic/social crises at the end of our noses, and everything to do with esoteric texts written thousands of years ago.

It is perhaps ironic that many commentators on the book of Revelation (the source of a million Christian predictions of apocalypse) have a very different understanding of the text, pointing out that it was one of many pieces of ‘apocalyptic literature’ of its time- a style of writing that used mysterious and ritualised language to shine light on the culture of their day. People reading the text under Roman occupation would have had a totally different entry into the language and imagery used. They would know who the Beast was, and the meaning of ‘Babylon’.

In this way, the coming apocalypse was a warning to people to take a long hard look at who they are, what they are becoming, and to refocus on a life that is in service of the Kingdom of God.

It was not a description (thanks again to Sharon who coined the phrase) of how God is going to use his great big hoover to suck his chosen few from a doomed and despicable world up into his heavenly fall out shelter.

The apocalypse that the followers of Jesus should concern themselves with is a daily occurrence. It happens always in the shadow of Empire as forces conspire to promote greed and power mongering.

Of course I could be wrong, it is not yet Mayan high noon. I kind of thought that if I am wrong no one would be around to laugh at me though…

An episode of ‘The Simpsons’ on TV this evening and made me laugh out loud- often. It was called ‘Thank God it’s Doomsday’, and centred around Homer watching a move called ‘Left Below’, then becoming convinced that the Rapture was about to happen.

Rather reminiscent of this.

WARNING- sweary-words to be heard in the following clip.

If like me, your tolerance for such things hints at your backslidden sinful state, then click on…

I stumbled across this whilst wasting time when I should have been DIYing (I now have water coming through the ceiling beneath where I recently installed a new shower. AGHHH!)

It set me thinking again about heaven, and hell, and what we might encounter when we die…

Oh, and I liked the accents too.

So what do we think about heaven and hell?

It seems that we Christians have two options to choose from- 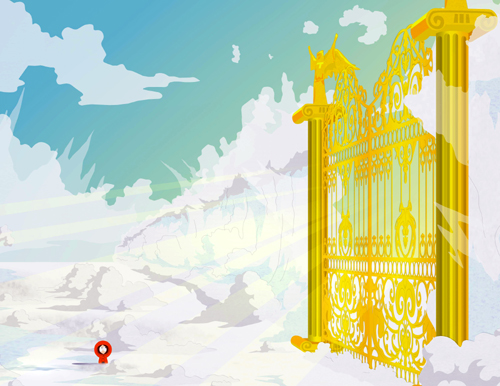 Hmmmm- which one do you fancy?

This, I suppose has been the evangelical strategy of church for a long time. Even though it has always troubled me- (back to those old Chick cartoons again I suppose!) It was not really that this narrow view of our impending fate was questionable within the theological understanding I was part of, but more that it was usually played down by most, and perhaps OVERPLAYED by some others.

But questions about the essential truth of this equation were never encouraged. Some of this was about Biblical truth, and the unassailable network that had been constructed around particular meanings, and some of it was about POWER- and the in-out stuff that allows us to decide who is OK, and who is not.

My concerns have always been for the following reasons-

So where am I up to now?

Well I realised that lots of Christian traditions have different views about heaven and hell. Some people have always had the concerns above, and even dared to express them.

To give McLaren another plug, I read his book ‘The last word and the word after that‘ a few years 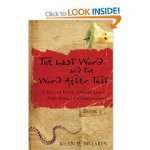 ago, and it was another one of those painful experiences, where I found myself confronting things I had avoided for fear of losing faith altogether.

But the end result was a deepening of the sense of who God might be, and how he might engage with us all.

In particular I was amazed to discover that the view of heaven and hell I had accepted as a fixed Biblical position appeared to have its origins outside the Bible, and perhaps even outside the Judeo-Christian world (this is not an idea original to McLaren, it seems, but is well understood by many Theologians, but ignored as irrelevant by others.)

A quote from Brian (pinched from an interesting blog post here)

One of the discoveries that led to the book came to me several years ago, but I don’t remember exactly how. I remember noticing that a number of Old Testament writers didn’t seem to believe in an afterlife. It was obvious in Ecclesiastes, but you know – that whole book seems odd. It struck me in some of the Psalms especially. Then I noticed this lack of belief in afterlife in other places, and I realized that Sheol wasn’t the same as hell.

Then I began to notice that Jesus talked about hell a lot, which let me know that something must have happened between the end of the Old Testament and the beginning of the New. I was curious about what happened during that time.

What appears to have happened is that some Jewish sects/denominations (but not all) adopted ideas of heaven and hell from other religions- such as the Zoroastrians, and this synthesis of belief systems became the understanding through which the Jewish people engaged with God.

There were apparently significant differences in for example, the Pharisees understanding of heaven and hell, and that of the Saducees. The former believed in the resurrection of the dead and the latter did not. Interestingly, it seems that the Saducees rejected the Pharisaical views on an afterlife on the basis of a literalistic interpretation of the Bible, rejecting the exegesis and oral traditions of the Pharisees. Truth wars were raging then too!

It seems that these grouping effectively became political parties too- so religion was definitely mixed with politics!

Well when you read again the questions put to Jesus in the form of tests by these groups, it seems at least possible that they were attempting to either bring Jesus within their own fold, or expose his theology to be outside their understanding of truth, and so reject him.

The wonderful thing about Jesus is that these attempts failed, because he saw the trap coming a mile away, and neatly stepped around it. He seemed to have no time for this way of seeing faith.

Is it possible then that at least some of the words of Jesus in relation to heaven and hell can be read in the light of the context in which he was engaging? Does this change our understanding of what he was saying, or how it was recorded?

STOP! I hear you cry. This is going too far- it is a liberal re-interpretation of the Bible that will end in heresy!

In my defense, I offer no fixed positions to invite you to join me onto, and thereby defend.

But I dare to believe that the life that goes on when we are done here will always remain to us a wonderful mystery.

And I dare to hope that Jesus may yet find a way to save those who we have lost.

Hell may or may not be the place that burns up that part of us that is unworthy and unwelcome in the presence of the Living God.

And I pray that by his mercy, I will fall into the arms of a loving God.