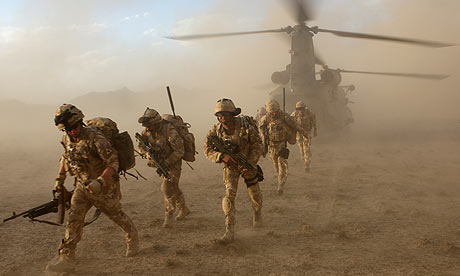 Picture from The Guardian.

Another remembrance Sunday is upon us. Images of all those thousands who died like cattle in the first world war will flood the screens, along with a Spitfire fly past. Our more recent maimed young soldiers will be wheeled out, or teeter out on the carbon fibre blades that replaced their legs.

There was a great article in the guardian today which used the phrase ‘soldier worship’ to capture something of what tends to happen at these times. A quote;

We should not feel compelled to point out that those brave men and women are fighting in Afghanistan to secure our safety every time the military is mentioned. First, because it is not true that they are; and second, because such blustering at the merest glimpse of camouflage clothing is an obvious and embarrassing capitulation to dogma.

What is the dogma being referred to here? I would like to suggest that it is the myth of the hero-soldier, fighting for our freedom, our way of life, our nationhood. True reverence (or true worship) for the heroic sacrifice they make on our behalf is to elevate the soldier onto a public plinth. This is not necessarily the same thing as rewarding individuals, rather it becomes a political hermeneutic through which we view current wars.

We in Britain have been evangelised into this new religion to a certain extent by what happens in the USA. It seems to me that it is only a recent thing that the word ‘hero’ was used each time a soldiers were mentioned in this country; not so in the USA where ‘veterans’ are regarded as we might someone who walks in to a burning building to bring out children.

Is it just me who feels a little uncomfortable every time I see the words ‘Help for Heroes‘?

I think I should be clear that I am NOT saying that soldiers should not have our respect, or our assistance in the event of injury. Even the shameful conviction of a Royal Marine commando this week for torturing then shooting a prisoner should not suggest that soldiers like killing people, or have universally lost their humanity. What it tells us rather is that war brutalises, damages and degrades everyone involved in it, even (and perhaps particularly) those who are victorious, all powerful.

In my years as a therapist in primary care, I saw a lot of ex-servicemen. The area around Bolton and Wigan has always been a big recruiting ground for the army in particular. I remember their stories, fractured and halting as they were, vividly. Mostly they were seen backwards through broken relationships, alcoholism, even prison. A man who had served in Cypress, unable even to describe the terrible things he has seen. Another man describing the slaughter of Iraqi conscripts in the first Gulf War. These were men for whom the war itself was almost the best part of them. But it was also the end of ease, comfort and self assurance. Part of this was always guilt for what they had done- sometimes personally, sometimes collectively, often just because they survived when others did not.

Are these men heroes? Some of them may well be incredibly brave, and had dreadful experiences. however, to continue to espouse soldier-worship does something to the way we view war itself. Despite telling human stories from war, it does not humanise war; it runs the real risk of idolising it. By viewing conflict only through the eyes of the mostly masculine gadget-laden machinery operated by our own heroic boy-adventurers is a remarkably effective way of taking our eyes of the nature of the conflicts themselves.

Think of all those war films- even the ones that are regarded as ‘anti-war’. Who are the lead characters? Whose life and death experiences hold our fascination? Almost every one of these films, brilliant and moving as many of them are, are long hymns sung in the church of soldier-worship.

A few years ago I wrote a post entitled Losing small wars, but not not learning lessons. I tried to outline some of the myths that we were being asked to swallow in relation to our current war making;

We have been brought up to view our own military misadventures as essentially good versus bad- the plucky resourceful Brit against the Towel-head/Hun/Jap/Red. We always triumph in the end- true character always does.

This ignores all the evidence to the contrary- the mounting body bags, the torture of prisoners, the resounding “NO!” echoing from the population of all these countries that we are supposedly liberating.

Then there is the stench of post imperialist self-interest, and the feeling of being manipulated by murky spinners of media messages- all of that gung ho ‘smart’ bombing and ‘shock and awe’-ing.

The only way to humanise war is to understand that the enemy is flesh and blood too, has children, dreams, fears, irrational and rational passions and beliefs. We have to remember the hundreds of thousands of people, men, women, children, whom have died very un-heroic deaths in our recent wars. Whom have lost un-heroic limbs and have very un-heroic disfigurements.

In the meantime, this Remembrance Sunday, it is right to remember all those who died.

But let us not use the word glory– the first world war killed that one.

Neither let us use the word honour- their is no honour in war. World war two made this clear.

And as for the word hero, let us use this word sparingly and apply it most fervently to those who make peace in the face of violence.

What a day. Will turned 21, and as all the party stuff is not really possible, instead we invested in future musical gatherings and bought him a new guitar. Then, because we were in Glasgow, Emily also went to the violin shop and bought a 'new' violin, which was made in Dundee back in 1856. The music has come full circle.
@potfest.co.uk day 2. The calm begot the storm... We had a great day yesterday, with some fantastic conversations. Here's to more to come today. @seatreeargyll
One of the joys of exhibiting at #potfestscotland is that after the mad day setting up your stall, you can wander the beautiful Scone Palace gardens.
Mum and son afloat
It's that time of year again. This flower always reminds me of the friend you have us them. Thanks @seidelhood xx
This is our 'competition' piece for Potfest. I really like it, which I can say without boasting cos it was all Michaela's work, bar the mounting.
This morning, bread. This afternoon, gardening... Or beer?
She is almost perfect, is my wife, but spot the slight mistake!
Today I played a game of actual cricket.
Working on boats always seems to create such a mess. In this instance we out Will's boat on the hard to change a sea cock, take out and seal a window, then install solar panels. Fitted in a couple of beers with me boy and a live Chris Drever/John McCusker gig via zoom too.