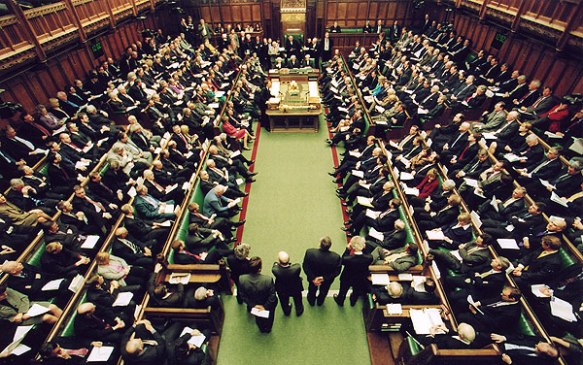 So, the politics in the UK takes another strange turn.

The papers are full of details of expenses claimed by Members of Parliament- from the maintenance of moats, to pornographic videos.

The Speaker of the house has resigned during a sitting of parliament- for the first time ever.

Change is in the air- both in terms of the party in power, who may yet be forced to call an early election- and also the pressing need for reform of some aspects of our political system. Whether or not there will be real change, it remains to be seen. The British tend to change constitutional things slowly, and pragmatically.

Is this crisis a good thing? A good shake up and clear out of the system is sometimes good- although the moral and ethical tone of the current debate tends to be a little difficult to stomach- coming as it does from the Daily Telegraph. It is not so long ago that the out-going Conservative party fell into a trough of sleaze and allegations of ministers being bribed with envelopes stuffed with money. The Telegraph had a different set of priorities then.

But the current scandal seems to confirm a base view of politics that views all politicians as ‘the same’, feeding from the same honey pot, out for what they can get. If such a view persists, then our system of democracy is under threat.

The problem with this view for many of us, is that for many years, we believed that all politicians were NOT the same. There were ours, and theirs. Ours were politicians of conscience- men (and women) of passion and integrity- committed to an ideal of social justice and socialist principles. Theirs were out to protect their privileges- slaves to big business and multinationals- committed to maintaining inequality.

This simplistic, dualistic view of the world defined my life for years. It was a comfortable, safe place- which allowed easy categorisation according to ideology for just about everything. Things were either politically correct, or they were not. There is a naive simplicity which is still attractive to me as I remember these things-

Food– chosen according to origin. South Africa and Israel (Apartheid and Palestine) were to be avoided, as was anything by Nestle (Because of their promotion of Baby milk to sub Saharan Africa, with devastating effects.) Meat was forsaken because of the cutting of rainforests to grow beefburgers for MacDonalds, and Tuna was bad because Dolphins died in drift nets.

Music- had a message, or it was not worth listening to. And it had to be out message. There were some exceptions- allowed because they were good fun, and did not explicitly support the enemy.

And so on- you get the picture! All of life was seen through a world view that was defined by a particular politico-ideological perspective.

It was not simple for long. Our Heroes had clay feet. We had Kinnock, who blew it, Smith, who died on us, Blair who sold out and got in bed with Bush, and finally Brown who is merely presiding over the death throes of a party who long ago lost any sense of ideology and value base.

The thing is, I was (and am) a Christian. What I found was that it was possible to approach Jesus through the same narrow perspective. I genuinely believed that it was next to impossible to be a Christian and a Conservative. One meant life and justice for the oppressed, the other meant siding with the oppressors, which Jesus never would. For us, Jesus joined the Labour Movement. He was one of the boys. God was a socialist.

So how much harder is it then, to see the death of ideology over the last 20years? The end of politics driven by passion, and instead the easy slick accommodation of Blair- followed by the brutal prudence of Brown. A Labour Movement that found it possible to join a modern day American Crusade in Iraq and Afghanistan. That thought increased expenditure on health and education was the sum of it’s ambition. That presided over a widening gulf between the rich and poor of the nation.

And now a Labour government that came into power in 1997 promised to clean up politics. It promised a ethical foreign policy, and transparent funding processes…. and yet it ended up 12 years later with- this.

So, to the point of this piece.

Ideology can bring life. It can inspire enormous collective endevour. It pushed us towards a dream of living a better, more sustainable, ethical life. But is always falls short.

And when we promote an ideology above the author of everything- then this becomes, idolatry.

So let us watch the political twistings and turnings with interest. But let us watch as people whose allegiance is not first to an ideology, but to a King and a New Kingdom. 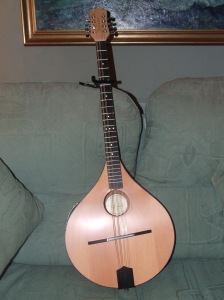 Today I received my bouzouki.

I ordered it many months go from Freshwater folk instruments, and it seemed like it would never come. When it did, there were some problems, which I have yet to sort out with Dave Freshwater, but it is a beautiful thing.

I have wanted a bouzouki for ages… I love the sound they make. For the uninitiated, a bouzouki is a guitar sized Mandolin- 4 strings, each doubled, with a fret board around the length of a guitar fretboard. It makes a sound that, once heard, is very different to guitars, and opens up all sorts of other tonal possibilities. It was originally a Greek instrument, restrung and adapted into Irish folk music by people like Donal Lunny.

One of my favourite bands, ‘A Show of Hands’ use them a lot, and I love the driving energy the closely grouped strings give to fast folk.

For the purists, my instrument is tuned to G D A D, which gives lots of ‘drone’ strings, and lots of lovely open chord sounds. It has been hand made from solid woods, and has a Fishman pick up system.

And it makes me happy to sit in the fading light and fiddle around with the strange familiarity of such a beautiful new instrument.

But, gnawing away at me is this word…. idolatry.

For musicians (not sure if that really includes me, but stay with me…) instruments easily become objects of drooling worship. A good guitar does not make a bad guitarist good, but it certainly makes him/her a whole lot cooler.

Did I NEED a bouzouki? Of course not.

Does owning one improve the quality of my life, or enable me to serve others more effectively? Not really.

So, Lord forgive this man and the grasping teenager within.

And let me learn again that what I have, you gave me, so that I in turn, may be a blessing to others.

A tree sculpture I made from driftwood, available on @seatreeargyll www.seatreeargyll.com
The other end
T'was a bit blowy today...
Last night's almost-symmetry.
Today we concerned ourselves with smaller craft. Working on Wills tender.
HMS Westminster pays a visit.
Home.
Uh huh huhhhappy birthday to me.
It can seem like a long cold dark road, but it is also the way home.
Not quite Willie Nelson's Trigger, but there is a lot of history here. This was Steve Conway's guitar, that became mine some time back in the '90s. I passed it on to Will about 5 years ago. You can the marks left by our playing styles... Like reading archaeology in soil, or runes on an old rock. #guitar @mac_tallatutoring