Thought it was time for Norman McCaig’s poetry…

I often talk to people who tell me that they struggle with poetry. It is as if someone contorted the language it was written in and mixed it into some other dialect- more rarefied, pretentious and elitist. Thinking about it, perhaps this is exactly what was done to it at school…

Perhaps too they have read the wrong poems. Or even never really read any at all. Or (even more significantly) they have never written any.

I too struggle with reading some poetry- this may be because it is never instant. Poems are all about the gift of slow reading- immersing yourself in the opaque ink bath, knowing that some stain will remain. Poetry is about feeling more than understanding. It needs time, and most of us have little patience for time.

Back to Norman McCaig. Here are two of his poems. Think of them as two love poems, at desperately different parts of life.

In which poem was love the strongest?

Not an ounce excessive, not an inch too little,
Our easy reciprocations. You let me know
The way a boat would feel, if it could feel,
The intimate support of water.

The news you bring me has been news forever,
So that I understand what a stone would say
If only a stone could speak. Is it sad a grassblade
Can’t know how it is lovely?

Is it sad that you can’t know, except by hearsay
(My gossiping failing words) that you are the way
A water is that can clench its palm and crumple
A boat’s confiding timbers?

But that’s excessive, and too little. Knowing
The way a circle would describe its roundness,
We touch two selves and feel, complete and gentle,
The intimate support of being.

The way that flight would feel a bird flying
(If it could feel) is the way a space that’s in
A stone that’s in water would know itself
If it had our way of knowing.

The hospital smell
combs my nostrils
as they go bobbing along
green and yellow corridors.

What seems a corpse
is trundled into a lift and vanishes
heavenward.

I will not feel, I will not
feel, until
I have to.

Nurses walk lightly, swiftly,
here and up and down and there,
their slender waists miraculously
carrying their burden
of so much pain, so
many deaths, their eyes
still clear after
so many farewells.

Ward 7. She lies
in a white cave of forgetfulness.
A withered hand
trembles on its stalk. Eyes move
behind eyelids too heavy
to raise. Into an arm wasted
of colour a glass fang is fixed,
not guzzling but giving.
And between her and me
distance shrinks till there is none left
but the distance of pain that neither she nor I
can cross.

She smiles a little at this
black figure in her white cave
who clumsily rises
in the round swimming waves of a bell
and dizzily goes off, growing fainter,
not smaller, leaving behind only
books that will not be read
and fruitless fruits.

I read this lovely book recently; 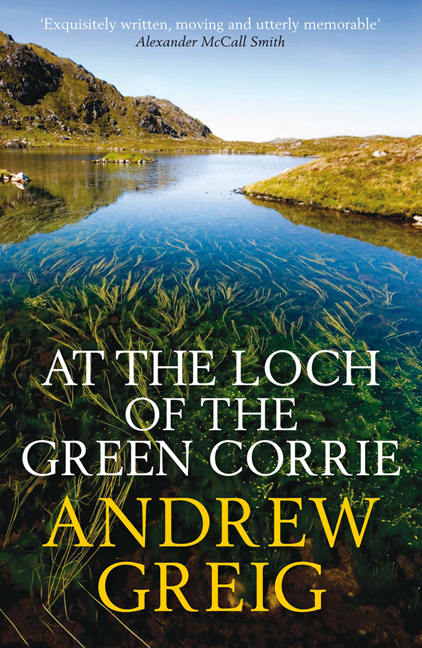 I will not go into any detail about what it is about, except to say that if you love poetry, landscape and humanity you will love this book. It is a beautifully written travelogue/memoir and obituary of the great poet Norman McCaig.

One of the things that resonated with me was how the book tried to grapple with Scottishness. Up here we are heading towards a referendum on whether Scotland should exist as an entirely separate country to the United Kingdom. The old confused profusion of ideas around history, identity, sense place in landscape, feelings of old injustices to be avenged, or old alliances to be celebrated- it is all there  just below the surface.

Andrew Greig talks with such eloquence about Norman McCaig’s generation- McCaig was a conscientious objector in the second world war and had a deep suspicion of nationalism wherever he saw it. I share this feeling. I have an outsider’s discomfort with borders and in-groups. I struggle to think of anything positive that came out of nationalism- it has so much power to bring out the worst of what we are, but rarely the best. It throws up statues of lots of dead people.

However, there is another kind of Scottish identity in Greig’s book- as he moves from city to mountainside there is a profound sense of place- a love of landscape. A sense of one-ness with the roll and curve of the land. A sense of understanding that others too have been here, and in some sense are here still. I have had plenty of glimpses of this in my own adventures. There is a generosity as well as a cruelty to mountains- they do not care about accent.

There is also this lovely piece of writing that I thought I would reproduce here- which is another image that stuck in my mind. Greig starts to think about his father;

…it began as a yarn about how he and his classmates, in the early years of the last century, would challenge each other to walk for as long as possible carrying a penny gripped between thumb and forefinger, the arm hanging down. It may seem an easy thing to do laddie but  no matter how hard you try sooner or later it will drop. Muscular fatigue, numbness, something like that. And I thought, what a fantastically futile thing to do, and how deep and Scottish a teaching it must have been, yoking together money, endurance and the inevitability of loss.

Then my father went on to say how, still carrying his penny, as a boy he once stopped in a gale under a Scots Pine. He stood against it, thrilled – not a word he had much use for – to feel bark shift against his back. He said he’d imaged the tree a mast, and yearned to be sailing where the wind was blowing…

I love this simple little story- of how we get caught up in futile loops, and imagine them to be significant.

But how there is a wind in the trees, and if we would let it, it has the power both to root us where we are, and also to call us to something far beyond.

How the two are related.

And so it is that we can be Scottish (even I) and still both bigger, and much smaller.

The other end of a long day.
Back to sea, as winter returns.
Bread baking day. We always do a big batch and freeze it. Nothing like warm bread just put the oven though, so a few rolls will not make it to the freezer...
Happiness is... a dusty chicken.
Nice out tonight.
Today we made up 50 of our 'workshops in a tin' for a local community project.
Spent this morning planting. It was lovely.
A few years ago I planted three silver birch trees in a close triangle near our front door. They were identical trees, bought as bare root saplings, planted at the same time with the same compost/soil composition, yet each year since then, they come into bud at different times. The one furthest from the light first, as if it needs it more.
Looking back.
Coming or going?