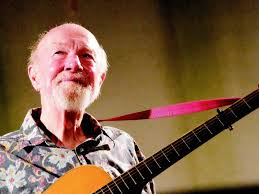 Pete Seeger died a few weeks ago. He was a middle class son of left leaning academic parents who began his radical education- then he discovered the real thing- Woody Guthrie, who died the year I was born in 1967 after years of Huntingdons disease.

Never have we needed protest songs more yet no-one seems to write them much anymore.

It occurred to me however that perhaps it always seemed that way. Seeger and Guthrie sold few records. Any plastic winner of Pop idol will sell ten times the product that they managed between them over almost a Century.The songs had nothing to do with making money, and everything to do with collectivising the experience of working people in the face of oppression. The more oppression, the more songs it seemed- black Americans had most of both.

The songs were sung on marches, in protest sit-ins, in union meetings. They were acts of defiance in the face of blatant obvious injustice.

The problem is that we no longer see injustice clearly even when it spits at us. This is the other role of the protest song- to make us look again at what was obscured by all the tinsel and tv. We need prophets to come out of the desert with a Gibson guitar and snarl to us that we have become fat on the meat of other peoples children.

I am reminded again of this song. It is heading in the right direction…

What a treat. Common dolphin pod playing around the tugs and ship as we slipped the lines.
Rain. Remember that? Oh sweet petrichor.
Polytunnel fecundity.
Moonrise
Nothing says 'summer' like shelling peas...
Beach bonfire!
Yesterday's job. You know the old adage about turning an oil tanker? This is what happens when it comes in the wrong way it takes hours to turn it (so that the fuel manifolds are in the right order.)
On the way home...
Tis warm. @crawfbell recognise where I am?
8am, waiting for the Cumbrian Fisher. Hot already, fire Scotland at least.
Join 426 other followers