The news has been full of the terrible story of the police helicopter that crashed into the Clutha pub in Glasgow at the weekend. 9 people dead so far, as they still try to clear away the unstable remains of the old meeting place.

One of the dead was a poet, John McGarrigle, who wrote of life in Glasgow with an honest voice- speaking of unemployment, drugs, human warmth and emotion in witty and funny ways. There seem to be a sad few of his poems on line, but there are a couple here. I did not know his work well, although had heard of him.

What a way to go. Sitting with your friends in your regular seat in a the local, sharing stories like poetry…

I thought I would write my own tribute to John, by way of deep respect to those who have lost loved ones in Glasgow. Here is the first draft;

The death of John McGarrigle

John holds court in the Clutha

Filling the fug with the chug of laughter

The drink at his lips was welcome

But not strictly necessary

By a tumbling helicopter

They say it came through the roof

To the Clutha poet

How should a poet meet his end

On some blasted heath?

Or a set of ill-fitting false teeth?

John had a poem in the curl of his glass

When the chopper fell down on his head

Today both Michaela and I were in Glasgow for different reasons. I had some work meetings to go to, she was speaking at a conference, so stayed over the night before in a posh hotel.

I really enjoy walking around cities these days- looking at buildings and watching people. I spent some time around Trongate- a place full of small shops, galleries and old buildings still looking for a purpose beyond being a blanks space for a million fly posters.

I took some photos on my mobile phone. Somehow it seems like the right gadget to record urban shots with…

Back after a lovely couple of days in the big city. Here is the proof (via my mobile.) 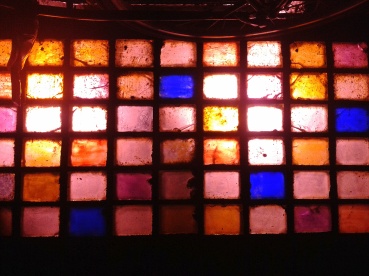 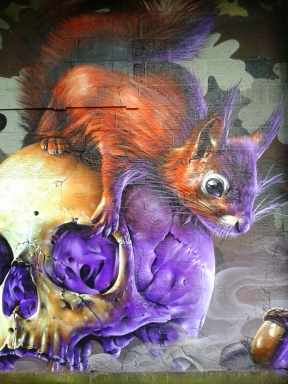 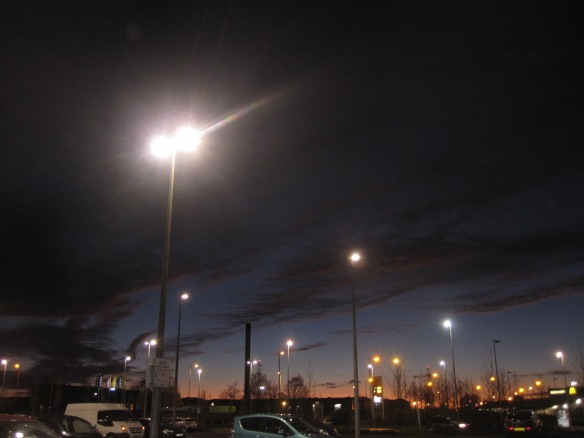 Now is the time for all good people to make a pilgrimage to an out of town shopping centre.

We will drive to a massive windy car park, and stare wistfully at the beckoning horizon, as we prepare to enter the zone of artificiality.

The temperature will be controlled to allow us to just about keep our coats on. The music will twitter in the distance with some kind of seasonal faux-bonhomie. The walls will be tastefully decorated with carefully designed Christmas blandness.

Each shop you enter will be selling more or less the same thing, with a slightly different labels. The music will be louder, and every step you take will have been carefully planned to maximise your market potential.

Michaela and I made our Christmas shopping trip last week- we took a trip into Glasgow which is not something we do often. Despite our determination to ‘do Christmas differently’ (mentioned ad infinitum on this blog) some shopping is still necessary, so we decided that we might as well have a day out together.

We went to a famous old shopping street called Byers Road- and revealed our country naivete by trying to buy some food from Subway only to then realise that it was actually a subway station.

Byers road is full of vintage clothing and charity shops- which have moved into the spaces left as the major chains have moved out of town into Bland Land. Instead of bemoaning the death of our city streets however (which would be disingenuous as they are clearly nor ‘our’ city streets) Michaela and I visited all of the charity outlets. We immersed ourself in bric-a-brac, delighted in stacks of old LPs, and a strange mechanical pencil sharpener made in the old East German Republic.

We also bought presents for the Kids- and I suddenly felt a deep sense of pride that I was able to be sure both of them will be delighted with what we have bought.

That is not to say that there will not be over consumption in our house at Christmas. It will be full of far too much stuff as we celebrate the coming of Jesus into poverty. We will over eat, over drink and stay up late watching pointless films. But if shopping is required at all, this is my preferred kind… 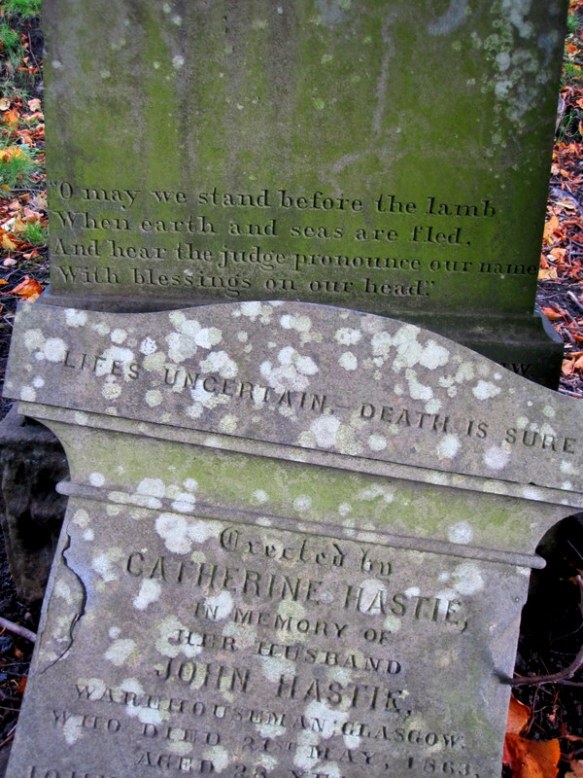 Health inequalities- what causes them? Why do people in some parts of the UK have an average lifespan of years and years longer than people who live in other parts?

In previous discussions, we suggested that this difference was primarily caused by pockets of extreme deprivation in the inner cities- an underclass who die young through high risk lifestyles skewing the statistics. However this may well not be the case.

This from the Guardian;

…the conventional wisdom that Glasgow’s ill health is all down to poverty, bad diet and bad behaviour is, at best, partial and, at worst, misleading. Despite years of research and decades of evidence that something has gone terribly wrong in the heart of Scotland’s largest city, the underlying causes of Glasgow’s fatally poor health remain something of a scientific mystery.

Poverty alone doesn’t account for Glasgow’s dismally low life expectancy. Other British cities – Liverpool and Manchester, for example – have rates of deprivation every bit as high as Glasgow, yet their life expectancies are substantially higher. What’s more, even Glasgow’s most affluent citizens, those in the top 10% of the income distribution, die significantly younger than their counterparts in other British cities. At best, according to the epidemiologists’ calculations, deprivation accounts for less than half (around 40%) of Glasgow’s “mortality gap” compared with the rest of the UK. The other causes are still unknown.

This is quite a statement. For many years research had pointed clearly to the fact that poverty is the single most likely indicator of life expectancy. What other options are there that might explain the Glasgow situation then?

With colleagues at NHS Scotland and the University of Glasgow, Walsh has devoted much of the past five years to uncovering what makes Glasgow so different, compared with other, similarly deprived British cities. If you think deep-fried Mars bars are to blame for Glasgow’s ill health (as many English commentators seem to), then think again: obesity rates in the city are actuallylower than in some English cities.

Nor can Glasgow’s infamous penchant for alcohol and cigarettes explain the puzzle. According to the largest health surveys in England and Scotland, Glaswegians neither binge-drink nor smoke more than their peers in Liverpool or Manchester. Drug abuse (particularly heroin), knife crime, murder and suicide are all significantly more prevalent in Glasgow than in other cities. But that only prompts the question – why is this the case? What is it about life in Glasgow that seems to predispose some of its citizens to such destructive behaviours?

“Lots of people have their own pet hypotheses about it,” Walsh says. In a recent research paper, Walsh, McCartney and their co-authors, Chik Collins and David Batty, assessed no fewer than 17 competing explanations for Glasgow’s ill health. There are theories that blame the weather (perhaps it is vitamin D deficiency or chilly winters?), those that blame the data (perhaps Glasgow is simply poorer than it looks?), plenty of theories that blame the Glaswegians (a culture of hedonism, sectarianism or alienation) and still others that point the finger at the Tories (a “political attack” on Glasgow, conducted by Margaret Thatcher’s government). Some have more supporting evidence than others, but all are unproven, says Walsh. “The main thing to say is that it’s not going to be one thing. It’s going to be a combination of different factors interacting,” he says.

Point of death may not be the best measure of a life, and population wide stats tell little about individual experience- but I believe that this gap in life expectancy is a terrible blight on our country which should really be much higher up the political agenda.

If you are in central Scotland, then a project being run by St Rollox Community Outreach needs your help.

“Destitute Food and Hygiene Parcels Project”.  They now have 13 people registered as well as occasional users and, at present, are at full stretch and will have to turn away anyone else seeking to register.   There are distribution points stocked by other projects across Glasgow but destitution is on the increase amongst asylum seekers and likely to increase further if plans to give the housing contract to a security firm go ahead.

Donations of the following items are required to assist destitute refused asylum seekers who cannot return to their own countries at the present time:

Collection of donations can be arranged.

Quote from a regular recipient of a food pack “I cannot find the words to thank you for what you are doing here for us so I simply open my heart to God in prayer because He sees how grateful I am.” (a lady in her 60s from Zimbabwe).

When we go to them as a family, I find myself falling into a trance like state. I stand and read all those pieces of writing and little bitty labels. I do not bother with most of the gimmicky interactive stuff- I just like to encounter things that carry with them meaning from the past.

The weekend was a case in point. We went to the stunning new Transport Museum on the banks of the Clyde in Partick, Glasgow. It was full of cars and motorbikes and trains. Everyone else soon gravitated towards the cafe but I wandered- intrigued by a model of a battleship or a 1932 Argyll motor car. I enjoyed it all.

And it occurred to me how we humans love to organise things- to place them in some kind of category and shelve them all away so we can make sense of it all. It is the very life blood of those who curate museums.

And perhaps too those who curate our experience of religion.

A large one in today.
She will hate this, so I allowed her a slow reveal. Here's to the lass I love, who hates photographs of herself.
I suppose it is possible that somewhere in the universe there is a place more beautiful than this.
Feeling exceptionally spoiled. Michaela and I have been so busy this year so it is all the more special to spend a couple of days at the fantastic St Columba hotel. Quite the poshest place we have ever stayed. It is our anniversary too!
That'll be why then..
Dropping the old man off at the ferry... I don't have his ears, do I?
Today's bounty. Big spawning of wine caps. Yum.
One of the joys of playing for the XL club is that we get to go to cricket grounds in the most lovely corners of Scotland. This one is the second oldest in the country. Any ideas which one? (By the way, it is for sale if you have a couple of quid.)
We played apple trees 3 years ago and this year may have a decent crop. There is a kind of deep satisfaction in a well grown apple.
Recently out of the kiln. The first one a commission, the other will be available as part of #cowalopenstudios2021