Emily told me to watch this.

If you have an interest in politics/economics/inequality etc, please watch it. I find myself slightly shocked at recommending a clip with a narcissistic smart mouth being interviewed by someone who uses cynicism like a rapier.

But watch it anyway.

Someone is shaking the tree. The video has gone viral- young people are revolting (if only by clicking the ‘share’ button.)Questions are being asked again about injustice, the operation of power, the distracting divisive effect of the media.The Occupy movement is heard of again in the mainstream media- I worried that it had been blown away like an electronic leaf in a cyber storm of ephemerality.

And perhaps most of all, a voice is speaking for the next generation – my kids – about the possibility of change. No, the NECESSITY of change. I fear that these voices have been silent, overwhelmed by consumerism and the chasing after product; be that a physical thing or a commoditised experience.

Where is the connection to action? What is the vehicle for change? What are the dangerous ideas that will inspire?

The only idea Brand seems to have is this one- do not vote. It is a waste of time.

He may be right- but what do we do instead then?

I hope and pray that my kids might start to find some real alternatives. That they might come to believe that a different world is possible.

Watching Brand and Paxman is like engaging in a conversation between myself and my daughter (in fact it resulted in just that.) Paxman and I failed; after our radicalism, things got worse. Thatcher skewed us ever further into a credit fueled consumerism. The world became more unequal, power more concentrated in the hands of the rich.

We might cast cynical glances at the ideas of the next generation, but it will be their world soon, if it is not already.

Interesting interview with the current Bish of Durham in the Guardian.

Justin Welby, who is apparently one of the favourites to become the next Archbishop, has an interesting background at the centre of UK establishment- Eton school, Cambridge University, The City of London as an oil executive, along with stints working in the oil fields of Nigeria.

All of which would suggest that his perspective on economic ethics would be rather right of centre. Not so however- this on the Occupy Movement;

“Occupy reflects a deep-seated sense that there is something wrong, and we need to think very hard about what’s wrong.” I press him on this, just to make sure I am hearing him right: “Were Occupy right that something is wrong?” He doesn’t hesitate in any careful, diplomatic Anglican way. “Of course they were right. Absolutely. And everything we are hearing now says that.”

His time as an oil executive in the centre of the City must give him a particular perspective on Capitalism, red in tooth and claw. The interviewer asked him if it all was not just one great, big conspiracy against the common good; profits privatised, losses socialised, to which he had this to say;

“When one group corners a source of human flourishing, it is deeply wicked. It applies to the City, to commodities traders, and to churches who say only this way is right.” This is pretty strong stuff. He continues: “The City is unspeakably powerful. The longer I go on, the more I am aware of the power of finance.”

Talk of the common good is exactly where Bishop Welby is at, ethically. He cites Pope Leo XIII’s 1891 letter Rerum Novarum as the greatest influence over his moral thinking. In this letter, a response to the exploitation of workers in industrial societies, the Pope sets out that the job of the state is to provide for the benefit of all, not least the most dispossessed. Though it rejects socialism, the theology it advocates lays out what later came to be called a preferential option for the poor: “The interests of all, whether high or low, are equal. The members of the working classes are citizens by nature and by the same right as the rich; they are real parts, living the life which makes up, through the family, the body of the commonwealth … therefore the public administration must duly and solicitously provide for the welfare and the comfort of the working classes; otherwise, that law of justice will be violated which ordains that each man shall have his due.”

There is also an interesting discussion about how Christianity is intertwined with capitalism- how the cultural inheritance of Christianity made us who we are, including our greed and excess;

(He quotes a) letter from the economist John Maynard Keynes to Virginia Woolf. The Bishop tries to recite the quote from memory: “We are the lucky generation, we have inherited the benefits of our father’s faith but don’t have the moral obligations. The next generation will be lost in their lust like dogs. We have destroyed Christianity, they will reap the cost of that.” In other words, Welby suggests we are living off and running down the cultural capital of Christianity. I point out to him that Stephen Green (Rev’d Stephen Green, now Lord Green, trade minister and author of Good Value, a book about ethics and finance) ran HSBC when it was laundering Mexican drug money, and Roman Catholic John Varley was CEO of Barclays. Christianity may offer little mitigation against City wrongdoing or morally significant mistakes.

Can Christianity, through the voice of people like Justin Welby, really start to become the faithful, engaged critics of our generation? Can we propose or model a real live alternative? This is my hope, although what this alternative may be is still so hard to visualise, so entwined are we with the culture we have both spawned and feed from. 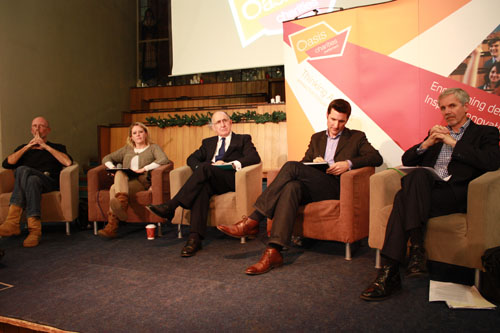 If you are interested in the reformation (or destruction) of our capital driven economic system, then check out this podcast from a recent debate held by the Oasis’s Charities Parliament-

Does capitalism need reforming, replacing or is it fine just as it is?

Listen to the lively debate around the question of our generation with representatives of Occupy London Stock Exchange, former investment banker Ken Costa and Dr Luke Bretheton.

You might also be interested in checking out some of the stuff on the Occupy Movement’s ‘Occupy Cafe’ website. It full of activism, protest and even poetry! Any activist website with poetry will get my vote…

I really liked this for example-

Says that America is for him a maximum-security prison

Whose walls are made of Radio Shacks and Burger Kings, and MTV episodes

Where you can’t tell the show from the commercials,

And as I consider how to express how full of shit I think he is,

Trooper with a gang of his friends, letting rap music pour over them

Like a boiling Jacuzzi full of ballpeen hammers, even then he feels

Buried alive, captured and suffocated in the folds

Of the thick satin quilt of America

And I wonder if this is a legitimate category of pain,

or whether he is just spin doctoring a better grade,

And then I remember that when I stabbed my father in the dream last night,

It was not blood but money

That gushed out of him, bright green hundred-dollar bills

Spilling from his wounds, and—this is the weird part—,

Clogging up my heart—

And so I perish happily,

Freed from that which kept me from my liberty”—

Which was when I knew it was a dream, since my dad

Would never speak in rhymed couplets,

And I think, “I am asleep in America too,

And I don’t know how to wake myself either,”

And I remember what Marx said near the end of his life:

“I was listening to the cries of the past,

When I should have been listening to the cries of the future.”

And you are floating in your pleasure boat upon this river

Even while others are drowning underneath you

And yet it seems to be your own hand

Which turns the volume higher?

There is also quite a lot on the site about faith- and how this might stimulate or oppose activism for change. Check out this or this for instance.

Let’s join in the conversation at least friends…

Cricket lovers will understand this. It is what happens when a village side players a Premier league side in the village cup, with only 9 players. Will hit 58 off 40ish balls, one of our openers 11 off 110. My contribution was, shall we say, insignificant.
Today we are down in Loughborough, in a very green corner of the Midlands. The sun is shining...
A few photos of our wilderness retreat to the McCormaig Isles.
There's nowt like a foraged salad at this time of the year. Water cress, sorrel, daisies, oak leaves, dandelion petals, primroses, lime leaves. All from the garden. We cheated and added soon tomatoes. Mmmm.
We start again. In the beginning there was not just word, there was also conversation.
Filling bookshelves is both pleasure and torture. So many old friends. So many.
These hands belong to a man who has been keeping wicket at all levels of cricket for well over 60 years, Mr Alexander Steele. It is a privilege to be on the same field as this lovely man, and I hope that he has many more games in him yet. If anyone thinks that cricket is a soft sport, take another look at those fingers, bent and battered by thousands of successfully completed catches.
Cleaning out the cuttings of picture frame moulding from beneath the Morso cutter was overdue. Must have been busy!
Heading to Bute by boat, to play cricket with my son. Life is good.
Believe it or not, this is after about 4 days of work.