A couple of years ago I wrote a post about a woman in hospital that I visited. I was thinking about her recently, and reworked some of my words into a poem- as part of my on going ‘protest poetry’ project. This poem still has more of a narrative quality but here it is.

The ward squeaks disapproval at my

The hospital is brand new.

After 40 years of patience.

Something went wrong when her husband died.

She was swallowed whole by the grief of it;

Captured in a concrete cocoon.

She was the recipient of all the best psychiatric science;

drugs greyed out her vision;

They even tried psycho surgery in a futile attempt

to scrape grief from her brain

And here she remains – toothless, but given to scratching.

Occasionally abusive, but with sense of humour

They say she has behaviour problems, that she is manipulative.

She was once a worker, a wife, a mother.

She wore a white cotton dress to picnic once

She loved to dance

Today we meet to stitch bureaucratic blankets for her next bed.

I clear my throat and speak out care-clichés

whilst people in a hurry to look busy

shuffle paper and steal glances at the time passing.

She looks up at the crisp suspended ceiling and cackles.

I hate those bloody

Everything is so square in here.

Put me outside next to the hedge.

I follow her gaze to the brown beech hedge.

Out through the square window.

And I want to wheel her out there

sit her under the winter sky

wind waving her long grey hair in a curve of protest

against all those bloody awful

There are parts of the UK that operate like some kind of holding tank for radioactive waste. Except that the waste is made up of people.

Some would call these people skyvers, wasters, people who live on the edge of criminality and addiction. They are the bastards of the welfare state; half lives created out of the fissive heat of market led capitalism.   They are gathered together where the housing is cheapest, closest together. Even when new, it is housing no one wants to live in.

And because it is irradiated, those who live in these places become defined by it, cursed by it, captured within it.

This has been the subject of study in sociology for decades- ever since the slums were replaced by high rise flats, which in turn were torn down and replaced by housing association faux-villages with their ragged green bits and broken picket fences.

The problem is not welfare even though there are problems with welfare.

The problem is not worklessness even though work is next to impossible to find if you are irradiated.

The problem is lack of hope.

The problem is caused by abandonment, by casting outside, by removing worth, by categorising as ‘other’, ‘less than’. By the death of dreams.

Today the Chancellor announced cuts of £25 Billion to welfare budgets and I want to scream out loud with anger at it all.

But who knows what to do with the radioactive waste? It is too expensive to clean.

I turn to writing as this is the only way I know how to scream. Here is another one of the poems that I am calling ‘protest poems’.

The wagons circled in that wild place

Under the kitchen table

He always wanted to be a pioneer

To ride the range, and

Eat beans beneath the wandering star

But no-one ever leaves this place

His range a reservation

In the streets below roam no buffalo

When I was born I was blue from cold

I had two mothers; one flesh

The other sent us giros

With my free school meals

That generation did not reverse disadvantage

But they held it at arm’s length for a while

Whilst I was educated above my station

But I could never forget that borrowed coal

It was a debt of compound interest

A life of social service could be the only

25 years later I am darkened by doubt

Did I became a kind of Uncle Tom

At the shrinking fringe of the welfare state?

Did I offer cheap ointment for chain-chafe

When I should have swung a hammer?

Unlike Tom I will not go quietly 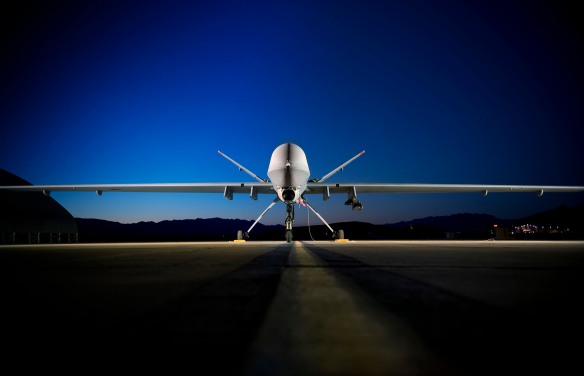 “The traffic was murder this morning”

He said, adjusting the gas strut of his over-padded chair,

three thousand miles away the drone tunes to his direction.

He is justice with a joystick

He is freedom at the press of a blood-red button

He has the wings of a dove and

Carrion claws of a vulture.

He takes his coffee black

The screen throws green reflections at his designer glasses

The other side of the world lies dark

But still this unblinking eye in a moonless sky

People have no faces. 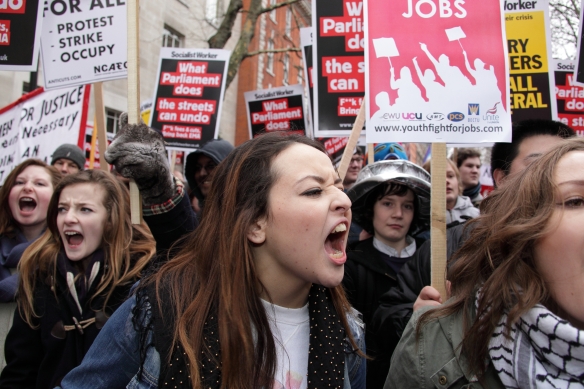 I have been thinking a lot about poetry that is prophetic– not in the sense of telling our fortunes, but more something that tells what we are- warts and all. Poetry that is an honest, engaged, hopeful critique of culture, and encourages us to think deeper.

There is a horrible danger of poetry like this becoming propaganda in the cause of whatever politics/theology/hermeneutic that we espouse. Poems like this are masturbatory- they pleasure only ourselves.  No matter what skill employed they are empty poems, blind to other perspectives. They claim to have answers to questions that are always nuanced.

I posted a poem yesterday entitled Welfare State which was my attempt to write  poetry of protest.

I had been increasingly angered by the actions of the current government in the UK, as they bring in sweeping changes to our welfare system. It all feels so unjust- making the poorest most vulnerable people pay for the excesses of the richest, and justifying this by vilifying  poor people as work shy, feckless. I wanted to use this anger to write something.

What I found though is that angry political poetry easily becomes exactly the kind of poetry I have described above- shallow self serving propaganda.

How then can we write the poetry of protest, of prophetic engagement, of challenge to empire in the face of injustice? I wonder if some of these principles might be of use (particularly for followers of Jesus);

This is a work in progress for me, but one that I feel keenly. I have this conviction in me that if we have a voice, we should use it – not just for saying pretty things, although there is beauty in this – but also to saying hard things, difficult things.

Art with nothing to say is simply wallpaper.

Today is the first day of Advent. I have found it a useful season to shape deliberate thoughtful journeying. It helps me head in to the winter darkness still looking for light. This does not mean pretending the darkness is not there however, so this book will be coming with me on the trip.
It turns out that this pocket in our car exactly fits a block of cheese.
Road trip #3. Melton Mowbray, where the public voted in favour of our Syrian refugee, despite returning a Tory MP. We stayed in Rutland, the smallest county, full of ancient (and sometimes wierd) history. Tired now and ready for home, but we have had a lovely time.
Calm before the show begins. @potfest
Roadtrip #3. After potfest, we headed to Mid Wales for a break, staying in a shepherd's hut and visiting Aberystwyth and (after a break of 20 plus years) returning to the centre for alternative technology for some hope and inspiration.
Road trip #2. We finished up a very lovely #potfestinthepens yesterday, then drove down to mid Wales for a few days R and R. Oh, and yesterday we squeezed in an early morning walk around Aira force, making good use of the clock change.
Road trip! First leg is down to Penrith for Potfest in the pens. A good day, followed by a swim im Ullswater(yes, it is the end of October) then...
What a lovely weekend, full of good things.
One day our ship will come in.
Join 430 other followers