Yesterday we had our lovely Aoradh Sunday- we gather for worship, then we eat together.

The first thing we do (this being the UK) is share a cup of tea. For people in our culture, drinking tea together is more than just refreshment; it is a symbol of friendship, a symbol of simple community and hospitality. As a friend of mine recently said ‘there are not many problems that can not be sorted out over a cup of tea’.

Yesterday we were drinking a brand of tea that has a long history- a company called Tetley who are the second largest manufacturer and distributor of tea (after Unilever.) We normally try to buy fair trade tea, but someone else had recently given us a large bag of the Tetley stuff, which tastes good.

Or it did until we watched this;

It is a simple thing to do.

Drink with a wider community in mind.

If you were to think of things that define us as a nation, most of us would include our addiction to tea.

Then there is our huge sugar consumption- in tea of course, but also lacing almost all of our other processed foods.

This morning I listened to the wonderful radio programme ‘A History of the World in 100 Objects‘ on Radio 4. It is nearing it’s end, but today’s programme described an early Victorian Wedgwood tea set.

And it brought to be again the need to understand history from the perspective of the small people- not the law makers and war mongers. Because the history of ‘Great’ Britain has often been one of militaristic expansionism, and economic oppression.

Slavery brought us sugar, via the terrible triangle of trade that saw African people stolen from their homelands and shipped like expendable cattle to work in the West Indies.

And tea- this was a much later economic obsession. Stolen from the Chinese, with much double dealing and opium peddling along the way, and increasingly adopted as the drink of high society in Victorian Britain.

But because it was expensive, there was a need to find ways to control the production, distribution and sales of tea on a massive scale. For this, we needed new plantations in a suitable climate.

And of course, we also needed a huge cheap workforce that we could control and dominate.

And so we manipulated, shanghaied and cajoled the poorest of another one of our conquests to move to a country far from their birth and work our new plantations in Ceylon.

To make this seem OK, we had to believe that we were doing them a favour. We had to be able to see these people as less than us, weaker, less human.

So we called them a name that befitted their status- a pejorative name. Coolies.

In the British Empire, coolies were indentured labourers who lived under conditions often resembling slavery. The system, inaugurated in 1834 in Mauritius, involved the use of licensed agents after slavery had been abolished in the British Empire. Thus, indenture followed closely on the heels of slavery in order to replace the slaves. The labourers were however only slightly better off than the slaves had been. They were supposed to receive either minimal wages or some small form of payout (such as a small parcel of land, or the money for their return passage) upon completion of their indentures. Unlike slaves, these imported servants could not be bought or sold. (From here.)

These mass movements of population leave their mark on human politics to this day, as does much of our colonial system. The Tamils who were imported into Ceylon (now Sri Lanka) were fighting a bloody civil war until only last year.

All of which makes my tea taste a bit sour.

And it does not get much better for the tea producing nations today. They are slaves to the free market, with commodity prices rising and falling, and plantations mostly tied to multinational corporations.

All the more reason then to drink tea (and coffee) as well as using sugar that has the fair trade mark– yes I know all about the tokenism thing- but my tea just goes down with more satisfaction.

And given my inherited history, it seems the very least that I should do. 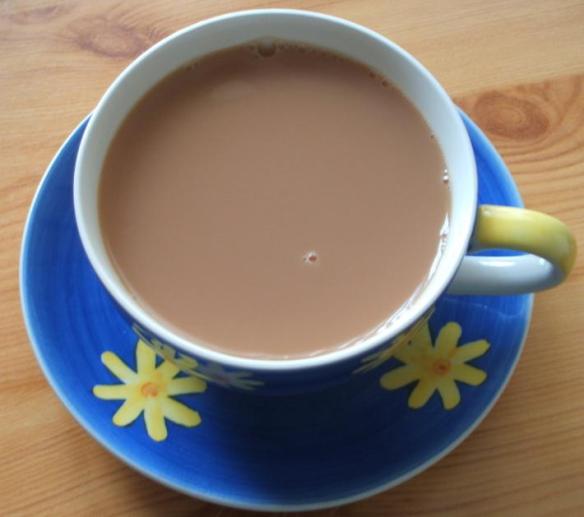 In you and even

Is wrenched and torn

By a glimpse of the pain

It is there in the small things

The turning of tide of the day from