I have been a vegetarian for about 26 years. I would like to pretend that this is for the highest moral purposes, fueled by compassion for the suffering of creation, but this would not be truthful. The fact is, when I was a student, desperate to find some kind of place of belonging in a world in which I was a rather dysfunctional outsider, I found myself surrounded by people who did not eat meat. Most of them were more confident, better looking and certainly more socially gifted than I was. One of them subsequently became my wife- and she was a passionate anti-vivisectionist who regarded eating animals as a kind of murder. Given that she still loves me after all these years might suggest that I made the right choice- one that we have both continued with even though this is more through developed habit than passion.

Our vegetarianism is not really about health benefits- despite all the concerns about red meat and larded-clogged arteries. After all, chips, chocolate, crusty bread and butter with deep red cheese and sugar loaded pickle are still every bit as challenging to my waistline.

If asked about the reason for my choice to eschew the burger and the lamb chop I could not have honestly claimed to be angered by the death of little furry creatures for our glutinous pleasure. As we look out there, we see a vast ecosystem of flesh clawing at flesh. Killing to eat is not something that I can find any real philosophical, theological or moral objection to- even though I have never killed anything on purpose then eaten it.

This is part of the problem- I became increasingly convinced that if I could not see the chain of meat production managed in a caring, responsible way, including the killing and the butchering, then how could I take my responsibility as a steward of the earth seriously?

Since then there have been many reasons to be concerned about the weird world of meat production. Foot and Mouth disease, horse meat in beef burgers, the use of rotten ‘reconstituted’ chicken in hospital food, etc etc. All these scandals seem to be what happens when the messy business of killing is conveniently out of sight and enslaved to profit margins and the demands of the big supermarkets.

However, back in my student days, with pomposity and self righteousness that I blush about now, I would also mention another fact that influenced my lentil-love. I would point to the fact that land usage in some of the poorest parts of the world was being dominated by pastureland to produce beef for our burgers. In fact, rain forest was being cleared at alarming rates just for this purpose too. In those days I could probably even quote you numbers- read in the magazine New Internationalist. At the time McDonalds were forced to announce a change to their meat sourcing, insisting that beef came from local sources.

My musical hero also encouraged this view- remember the song ‘If a tree falls’ from Bruce Cockburn?

Cut and move on
Cut and move on
Take out trees
Take out wildlife at a rate of species every single day
Take out people who’ve lived with this for 100,000 years
Inject a billion burgers worth of beef
Grain eaters, methane dispensers.

Through thinning ozone,
Waves fall on wrinkled earth
Gravity, light, ancient refuse of stars,
Speak of a drowning
But this, this is something other.
Busy monster eats dark holes in the spirit world
Where wild things have to go
To disappear
Forever

The argument then was that our meat machine was wasteful, took productive land out of crop production, depended on stupidly high energy use and it was all for markets thousands of miles away from where the animals were raised. The alternative was to encourage local sustainable food production, local markets producing what local populations needed. Damn it, we might even be able to do this in the UK if we really wanted to- let alone in South America.

This all came back to me again when reading an article in The Guardian by Ian Jack.

An academic paper in the new issue of Nature magazine’s Climate Change journal warns of the consequences of eating red meat, not in terms of cholesterol levels and heart attacks but for its contribution to greenhouse gas emissions. Domesticated ruminants are the largest source of anthropogenic methane and account for 11.6% of greenhouse gases that can be attributed to human activity. In 2011, they numbered approximately 1.4bn cattle, 1.1bn sheep. 0.9bn goats and 0.2bn buffalo, an animal population that was growing at the rate of roughly 2m a month. Their grazing and feeding takes up a greater area than any other land use: 26% of the world’s land surface is devoted to grazing, while feed crops command a third of the total arable land – land that might more usefully grow cereals, pulses and vegetables for human consumption or biomass for energy production.

The paper’s authors argue that, with more than 800m people chronically hungry: “The use of highly productive croplands to produce animal feed is questionable on moral grounds because this contributes to exhausting the world’s food supply.” Other well-known consequences include tropical deforestation and the erosion of biodiversity, but unless governments intervene (the paper calls for “increased awareness among public and policy makers”) it seems unlikely that the demand for animal flesh can be curbed. But which popularly elected government will ration meat or deliberately price it as a luxury? More and more people, especially among the newly prosperous in India and China, have the taste for it. Animal meat production stood at a global figure of 229m tonnes in 2000 and at present rates of increase will have more than doubled to 465m tonnes by 2050.

The Japanese appetite for whale meat has disgusting results, as does the Chinese fascination for ivory trinkets; but elephant and whale slaughter is surely no more than a peccadillo in the context of the great, ever-expanding, overheating slaughterhouse that the world feeds from. Animals with single stomachs such as pigs and chickens produce negligible amounts of methane; perhaps – setting aside the cruelty question – we should rear and eat more of those.

The arguments are stacking up. If you want to save the planet, start by changing your own patterns of consumption. A vegetarian diet is no panacea, but it starts to make a lot of sense when you take a long look at it.

Others are starting to reduce their meat consumption, or pay-more-buy-local- finding out where the meat comes from, how it was looked after etc. Some are even doing that admirable thing- producing their own. We have chickens and a veg patch, but some of my friends keep pigs and sheep too.

People often ask me if I miss meat. I can honestly say that I do not. The smell of bacon in the morning is still a pleasant smell however, even though I doubt I could actually eat it. Burgers always look disgusting these days, cooked or uncooked. I have never enjoyed fish even before becoming vegetarian, although Michaela sometimes eats it. There are of course as many problems with over fishing and farming as with land meat production.

Pass me a carot will you? 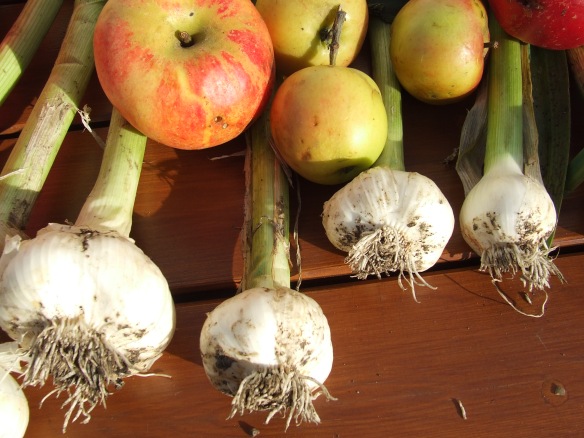 As a vegetarian I thought it was appropriate to share this.

Make room at your table for a turkey.

Nothing says 'summer' like shelling peas...
Beach bonfire!
Yesterday's job. You know the old adage about turning an oil tanker? This is what happens when it comes in the wrong way it takes hours to turn it (so that the fuel manifolds are in the right order.)
On the way home...
Tis warm. @crawfbell recognise where I am?
8am, waiting for the Cumbrian Fisher. Hot already, fire Scotland at least.
Mother and babies tucking in. (In mothers case to my apple trees!)
A significant investment in future potatoes.
Preparing for a poetry thing tomorrow...
For those Scottish cricket nay sayers, here is Brechin's cricket ground. Note the flag and the massive Bannockburn monument, complete with great big sword.
Join 426 other followers